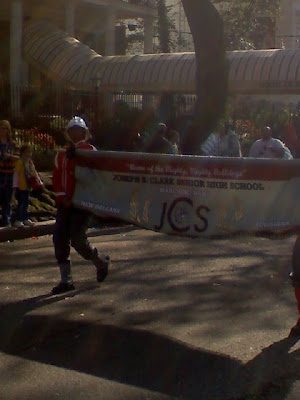 I love being from this city but so far this year I hate living in it. There are so many things bothering me about this city and its surrounding areas that all I can do is shake my head. That’s why I am glad I went to the parades yesterday. I can care less about catching beads and that other useless junk. I was happy to see the local bands. Folks around here identify themselves with their neighborhoods and their high schools. The band is a serious part of that. Yesterday I was on St. Charles and it felt pretty good seeing all the high schools coming down the street. That was a bit of a morale booster because they all appeared to have good participation. I especially enjoyed seeing my own school coming down the street. I think they had the best banner but they could have looked a little livelier than they did. At least they had on decent looking uniforms.

I will leave it up to Book to judge how every band sounds. Based on who I saw yesterday, and judging on appearance and uniforms, I have to say that the best school I have seen so far is Warren Easton (do not leave any crazy comments on my page either). All of the schools I saw look pretty good. The only schools missing is Fortier (their school got stolen), Lawless (their building was destroyed and my brother just read this and passed out) and Kennedy (they got played because their building is around a neighborhood where people have money and didn't want those poor kids back around there). I won’t mention any Jr. High schools because I don’t think we have them anymore. Oh well, it’s still a lot of progress from three years ago. I think I am going to try to check out a few night parades this week. Bands always look better at night for some reason. I just want to give props to all the band heads working in the schools to keep the traditions alive.

P.S. Southern University of New Orleans has a marching group that is setting Mardi Gras back 50 years with that showing. I can’t describe it. You just have to see it for yourself.
Posted by Clifton at 2/16/2009 08:47:00 PM

Hey, what about George W. Carver Senior High school. You know they have the best band in the entire school. They always have been. Lets give a holler for the orange and green. I am a Carver Ram and will always be one. You know they are the best. I will say they always play better than anyone.

nothing wrong about being proud folk

Warren Easton! We live right behind the school and the band comes down our street almost every day. I've got to agree they sound great.