A Good Mardi Gras And GIving Up Local Politics for Lent 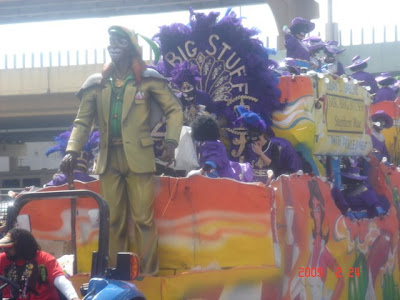 There are several things I need to make a perfect Mardi Gras day. You need good weather, no violence, a good spot on the parade route surrounded by good people, access to a restroom, a Zulu bead, and enough food and drinks to feel good but not so much that it makes you sick. We would have had a perfect 6 out of 6 if those assholes on St. Charles wouldn’t have decided to start shooting in a crowd full of people. That means it wasn’t a perfect day but it was a really good one. At least they got caught and no one died. Someone tell Chief Riley he can make one of his speeches about prosecuting these guys to the full extent of the law.

I am sure everyone knows this already but today is Ash Wednesday and the beginning of Lent. I am not Catholic but the principle of sacrificing something for 40 days is a good one. I usually pick something to give up and never tell anyone because my habits are so consistent that everyone who knows me would just wait for me to fail. I am not saying they want me to fail. They just know I like what I like and I do the same things all the time. Anyway, I have decided to give up blogging about local politics and I am sharing it with all of you.

I have several reasons. The first reason is that it’s going to be much easier to do that than giving up red meat or beer. The second reason is that I find it to be frustrating and not a true representation of what goes on in my life on a daily basis. I have friends and neighbors of all colors and we never talk about contracts and who’s picking up trash. We do discuss things but most of the time everybody has the same problem. The path to fixing it may be debatable but the issues are common. We are our own worst enemy. I was listening to Tom Joyner’s radio show Monday and he made the comment that he didn’t understand why we were having Mardi Gras when there were people still sleeping under the bridge after Katrina. As incorrect as that was I couldn’t be mad at him because since all we do is argue and bicker about everything, people would get the impression that we really don’t give a damn about one another. I am sure there are some people that don’t but that has to be the minority. I have to think it’s the minority because it’s the only way I can function here without losing my mind.

My grandma’s gone. I never found my dog. My family is relocated to other cities. When I came back to this place I didn’t just drive up to the house put the key in and go to bed. It took me two years to get back in my crib and I am still wondering how many years it’s going to take for me to stop thinking about where everything and everybody used to be before the flood. I am not saying this just to make you feel bad for me. I’m saying it because I feel like I have paid as many dues as anyone here and If I can’t be happy about being here then I am going to start asking myself why the hell am I here and you can’t function anywhere with thoughts like that. Lent is here at the perfect time. Everybody can keep arguing about old issues without discussing any new ideas. I’ll be blogging about my renewed quest to grow my hair back and getting ready for the recession. I just hope no one does anything so amazingly crazy that I get the urge to write about it.
Posted by Clifton at 2/25/2009 03:21:00 AM

wish i was there

So do I. Stay as you are. Don't change a thing.

I made a conscience choice to stop blogging about local politics for many of the same reasons, yet never could have described the rationale with any of the eloquence you just did.

I think that being here, raising a family here, living here... all of these are very political actions that speak volumes. Just documenting the reality of being here is part of an important dialogue of recovery... because living each day is what recovery IS.