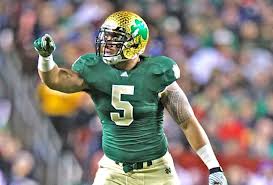 I’ve been watching and reading about Manti Te’o for the last two days. It’s a real fascinating story. It has so many elements of what I feel is wrong with our current culture. There are a lot of situations with this same kind of vibe to them going on but we usually don’t get a chance to break them down the way you can with Manti’s dilemma. The best part about it is that you can talk about it and even joke about it because no one has really been hurt in this. Since the girl doesn’t exist you can’t disrespect her family. No one around Te’o set up a fundraising event for cancer so there’s been no real fraud. Unless something changes this story is entertaining and harmless but there are some things that should alarm everybody.

I’ve known people personally who have fell in love with someone online that they haven’t met in person. It’s one of the elements of our society with so much technology. I can talk to everyone in my life without ever picking up the phone or leaving my house if I chose to. It was inevitable when the Internet became accessible as it now that people would be meeting that way. Besides, there’s a dating site for just about ever demographic you can think of. I’m not questioning that part of his story. The part that I will question is how in 2012 he wouldn’t at least have a camera phone or Instagram picture of the lady. There are people who take so many pictures during the day that you wonder what kind of cell phone batteries they have. I know Manti is Mormon and is a little slow socially but that’s ridiculous.

Personally, if I was in love with someone but I never saw her and couldn’t at least describe her I probably would have kept that relationship to myself. That way I could protect myself just in case things didn’t work out. Manti chose to go on a promotional tour highlighting his strength and perseverance to play through the pain of losing her and his grandmother on the same day as if his grandmother wasn’t enough lost on her own. It doesn’t matter if he was duped or not. It’s his fault for trying to milk the story for everything he good. He took that story and embellished it in an effort to transcend football and it worked well enough to place second in the Heisman trophy balloting. It seems like we can’t have a nice story and move on. We had to take him playing through grief and turn it into him damn near walking on water. Anyone can make themselves a national figure if they go over the top with their story enough. This is how Donald Trump became a legitimate voice in the presidential election.

That brings me to the most troubling part of this entire thing. How did a football player at one of the most famous schools in the country manage to go this long with a story that got attention from national media without anyone checking the facts long before this? It’s not like an on campus blogger blew the story up and it became viral. This story was blown up by major news corporations. These are some of the same news corporations we depend on for information about the policies and issues that are shaping our world. It makes you wonder how many people are walking around misinformed but don’t think they are misinformed because they got their information from the six o clock news. Maybe Manti Te’o’s story is basically harmless but we just had an election cycle with so many lies and negativity that I don’t think anyone really knows what’s going on. We are all just going on what we want to believe based on our personal beliefs. In the same way Te’o wanted that young lady to be a real person we want to believe that the things we are told by media and our leaders is honest. We may all be getting “catfished” right now.

Walk with a Real One: Mama's Words

This is another edition of "Walk with a Real One" and this post is dedicated to the five foot something lady who has always been by my side whenever I need her.  Yes, I'm talking about my dear mother, the queen bee, the lady in charge.  I think if I tried to express what this lady means to me, I would need about 3 blog posts but the reason she's my focus of this post is because she,too, is joining the blogging world.  My mom has decided to do a blog called "Mama's Words" and I think its going to be really great once she gets it up and going.

My mom has a very creative mind and can come up with things right off the top of her head.  I would love to read about what my mom has on her mind and see how she puts it into words of her own.  Since I've moved out, i've made a conscious effort to go over when I can and see what's new and with the blog, I can know what's on her mind more often even if I'm not there.


So as I end this and brag on my outstanding mother some more,  I encourage everyone to read this and I know you're going to love it.  It must be something in the Harris bloodstream that gets those creative juices flowing.  This has been another edition of "Walk with a Real One" and I'll sign out with these words of encouragement: GO READ MY MAMA BLOG!!!
Posted by 9thwardMM21 at 1/11/2013 07:37:00 PM 2 comments:

This is the first blog post of 2013. I have to say it was a good holiday season. There wasn’t anything I did or money I spent that I regret. The kids just went back to school and I just started a rare early year vacation.  The agency finally got serious about me taking some of my vacation days. While everyone else is getting into the flow for the New Year I am watching ESPN and drinking a few cups of coffee.  I wrote a task list for this week so I could feel like I was productive in some way. There’s a good chance that only one or two of the things I wrote down will get done.

I was snapped out of holiday mode last Friday after receiving my paycheck and noticing my social security tax increase. When I first saw the decrease in my take home pay I got upset. No one wants to lose money they could be using throughout the week. Then I calmed down and realized that I have to do my part.  Besides, who knows what we will be paying in deductions after the next government showdown on the debt and the budget. It seems like we are going to have one of those every two months so this increase may only be temporary. It’s almost time for the next debt ceiling crisis so who knows what may happen.  I figure if people raise too much hell about the increase it may trigger the politicians to rationalize that no one wants social security and try to do something to cut it. It doesn’t take much to talk the president into making a bad deal so I’ll just be quiet.

It’s just a minor adjustment to the budget until the insurance exchanges kick in and I can find a health insurance policy that cost a lot less than the HMO’s plan that is draining our agency and is going up yet again in 2013. I would have still preferred the public option but I guess the exchange will have to do. Between the insurance and the taxes, you have to set your budget with some overhead just in case.
I didn’t watch any football this weekend. After the Saints bounty season I needed a break. It felt like my team’s chances were taken away from them off the field. It’s hard to tell if the team would have made the playoffs even if they had the coach. After all, they did give up a record number of yards on defense. I don’t know if Sean Payton could have done anything about that. We’ll never know if we could have or not and that’s what sucks about the situation. It’s going to be interesting when Roger Goodell gets to town for the Super Bowl.

Speaking of the Super Bowl…...

I will not be heading anywhere near the CBD unless I absolutely have to. I don’t have time or the patience to keep up with all of the street closures and I am not sitting in traffic for 30 minutes just to get back to work. It’s going to be hectic down there until Mardi Gras.  I am not sure why we have to start blocking off streets so soon. The Superbowl is almost a month away. I guess you have to set up security and everything but that just seems like a long time to shut off streets in the city.

I have been thinking about cutting back on social networking in 2013. That’s going to be a more difficult task than I expected. First of all I have two cell phones, a tablet, and a laptop available everywhere I go. Second of all, I just had an evening long conversation with friends and family on Facebook about whether you should soak red beans before you cook them.  I would miss those moments.

There’s a rapper name Trinidad James that kind of sucks to me because I am grown. I was riding around with a teenager in the car Friday and when that guy came on he acted like he was listening to Marvin Gaye. Instead of acting like an old man and putting down hip hop in general, I tried to break down life and explain the impact of Rakim in 1987. It’s my responsibility to let the kids understand greatness.