I am finally feeling like I am back to normal after Isaac. When you have a storm that disrupts things it takes a week or two to get things back in order. Sometimes it takes months or years to get back to normal. Thank goodness I am not in that position this time around but some people are.  Unless something happens and we get more protection I think it’s time for everyone in this part of the world to accept the fact that every hurricane season we can potentially have a city or neighborhood that is devastated by water. We just have to do our best to recover as well as we can and keep going.

On a light note….I learned two things about life during the days when the power was off. The first thing I learned was that as violent as New Orleans can be now it would be even worse if we had to go a month without traffic lights. It wouldn’t be the usual suspects in conflict either.  Four way stop intersections bring the bad side out of people. There would be middle age women in all out brawls on Claiborne Avenue and Martin Luther King Blvd.

The second thing I learned is that I am willing to bet there weren’t a lot of babies born in April before there was air conditioning in South Louisiana. April is nine months after August and if you are in a house with no air in August it is too hot to want to touch anybody. When I was a little kid it seemed like all old people had a mean look on their face. That was leftover misery from sleeping in the heat.

My attempt to live healthier and lose a few pounds is going pretty well. I think I turned the corner when I stopped eating my second dinner plate after 10:00 PM. I don’t know if it is noticeable yet but I can feel it. I have a new incentive to keep going. I have three new Ralph Lauren Polos from Macys in New York. The only problem is that they are a size too small. In the past few years I have donated clothes to charity with the tags still on them because I was never able to lose enough weight to wear them. I like donating things. There are a few shirts and a few pair of pants that I don’t wear that will be donated soon. You must understand that the New Orleans hood kid in me will not allow me to give away those Polos without wearing them. Twenty pounds is going to make them look real nice on me.

I haven’t had much to say about the presidential election yet. I started paying less attention after Herman Cain dropped out of the race. That guy was entertaining. Now things are going like I thought they would between President Obama and Mitt Romney. The president is on cruise control right now. He’s just trying to get through each day without offending anyone or starting any trouble. I’m not sure what Romney is doing. I look at some of the things he’s tried this week dealing with Libya and I wouldn’t be surprised if he’s decided he doesn’t want to deal with this mess in America and is making himself fall behind on purpose. If he was I wouldn’t blame him. No one should want the job of president right now.

Maybe the Republicans have figured out that in a lot of states President Obama is the best thing that ever happened to their agenda on the state level and told Mitt to take a dive. The paranoia and hate for the president is so strong in some parts that people will vote against their own interest like the people in Alabama when they voted for that immigration bill and almost killed their farming industry. You have to be really dedicated to the Republican agenda to put your state’s farmers out of business. It’s been a golden time for the conservative agenda on the state level since Obama took office. They should have a secret super pac that runs ads against Romney in swing states. There’s no need to run them in any of these red states like the one I live in. No one is going to change their mind.

Besides the poor and elderly, the people I feel sorry for most of all since President Obama has been in office is all the commandos who went to the mountains and trained for the day Obama came to take their guns and freedom. They could have been at football games and hanging in strip clubs all this time. Instead they have been hiding away fighting wolverines and looking at dudes in camouflage for nothing.

Me and my coworker was at lunch today laughing and reminiscing about old times. I told him that I noticed that the period of life that I seem to speak most fondly about was the time when I didn’t have any responsibility and didn’t grow and expand as a person. When you are younger you have a lot of carefree fun but you can’t do that forever. Then you get older and start trying to create a life for yourself but the weight of trying to move forward can make it seem like the days when you were drinking with your friends at 9:00 AM and hanging out with girls you barely knew was the good old days. That’s not true. It’s the mental and physical fatigue that makes it feel that way. Sometimes when it feels too heavy you need to dig deep and push through it.

Black and Gold Week 1: Outlook on the Season 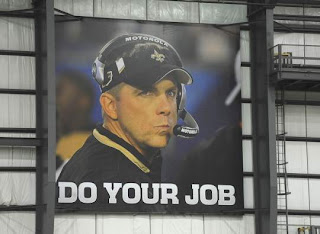 My friend Shawn has an advantage when debating the Saints with me because he predicted the 2009 Super Bowl appearance three months before training camp started. I’m usually not the type to shy away from proving I’m right but ever since then I have to give him the benefit of the doubt when it comes to what’s going to happen with the team. It’s going to be harder this year because we have a disagreement when it comes to the impact of Sean Payton being suspended. He thinks the leadership on the team and organization won’t affect the season. He thinks the Saints are going 13-3. I disagree with that. Before I get to my prediction for the season and tomorrow’s game with the Redskins, here’s what I think about the upcoming season.

I guess you can’t talk about the season without addressing the bounty situation. It’s either going to galvanize the team or eventually tear it apart because the biggest thing to come out of the entire situation is that the coach is suspended for the season. No one really knows what will happen when a crucial situation comes up during the game and Sean Payton isn’t there to make the decision. In my opinion, the lost of the coach is worth at least two games in the lost column.

There was no way the bounty situation couldn’t affect this season. It didn’t have to be as crazy as it is now if the commissioner would have just given everyone 2-4 games and moved on. He decided to be heavy handed because he has no one to answer to and now we have a mess. The media really did a bad job at investigating this story. They ran with whatever the commissioner said and at one point were mentioning lawsuits and criminal charges against Saints players. Now the suspensions have been overturned and the NFL will come back with lighter suspensions they think the players will except without having to go to court and produce evidence. Something tells me Jonathan Vilma isn’t accepting any suspension so Bountyate will be going on all year.

Last year the New Orleans Saints beat the eventual Super Bowl champion New York Giants so bad that by the end of the game they were trying not to score. 2011 was the first year that I actually felt like we were the best team in the conference and didn’t make the Super Bowl. That is why losing to the 49ers hurt so much. We gave that game way. The defense had two chances to make a play and stop Vernon Davis and they couldn't do it. I'm still shaking my head about it.

I’m having a hard time figuring out what happens this year. There haven’t been many changes to the roster. The biggest additions are Curtis Lofton and Steve Spagnuolo. The biggest losses are Robert Meacham, the coach, and Carl Nicks. We may have Will Smith and Vilma for a whole season but no one knows. The way I see it the season comes down to a few players. If Malcolm Jenkins, Roman Harper, Courtney Roby, and Joe Morgan play okay then there’s no reason why the Saints can’t win the division. The team played so basic during the preseason and the third preseason game against Houston so wild and crazy that you can’t get a good indicator of where things are.

I think the Saints have the talent to win twelve games. I am going to subtract three games due to Sean Payton’s suspension and say they will end the season at 9-7. Of course I’m going to find a reason for them to win every game this year and hope they go 16-0. On one hand this is probably the most motivated team and fan base in the league. Everybody is looking to stick it to Roger Goodell and show him that his suspensions couldn’t keep us from playing for the championship in our home stadium. On the other hand, this is an unprecedented situation and until a few games go by you don’t know how the coaching situation is going to work out. Then there’s always that problem with covering tight ends. That would concern me even if Coach Payton was there. I’m going to stick with my 9-7 prediction and we’ll see how things go tomorrow.

The Saints open against the Washington Redskins featuring Robert Griffin III. RGIII’s parents grew up in New Orleans and a lot of his family still lives here. That means I want him to have a Hall of Fame career. I just don’t want it to start tomorrow. I don’t know if the Saints defense is ready to make any offense look too bad so I will give them three touchdowns and say the final score is Saints 34- Redskins 21.

While I was writing this and watching college football Devin Walker from Tulane University was hurt on a tackle. He fractured his spine and stopped breathing for a few seconds. He’s in the hospital in stable condition. I love football and admire the players.  I never want to see anyone get hurt especially with a potentially life changing injury. I wish Devon Walker a full recovery.
Posted by Clifton at 9/08/2012 08:31:00 PM 1 comment: