Searching For The Line To Cross : What's Going Too Far? 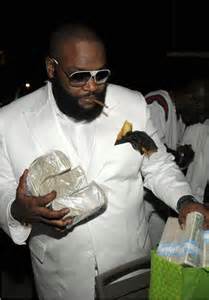 People are upset over some of the lyrics from Rick Ross that seem to glorify rape.  He was on the radio here in New Orleans and said he does not condone rape. He didn’t even say the word rape. Rick Ross is either ignorant in not knowing the full definition of what a rape is or he’s so stupid that he thinks you don’t condone something by not saying the word even if you describe it. My personal opinion is that you can only keep talking about the same subject song after song and he slipped up in an attempt to be creative. It was wrong and he should apologize and never perform that song.

There a few times a year when the community has a moment that triggers a reaction and you wonder if we are finally at the line where everyone thinks it’s time to stop certain behavior and get ourselves in order. Usually it’s something much bigger than a song lyric like a baby being shot or Trayvon Martin. No matter how much these events affect us things seem to go right back to the way they were. I don’t think that’s because we don’t care. I think it’s because we don’t know what the line is anymore. When there doesn’t appear to be a limit to what you can say and how you can act it’s difficult to know when enough is enough.

When I was in high school The Geto Boys had a song called Gangsta of Love. If my daddy had known this kind of song was in those headphones that I never took off he would have made me sleep on the porch. I was going to post a link to it but I don’t know who is going to read this. That song’s lyrics are so misogynistic it makes the things today’s rappers say seem like love songs. That was over 20 years ago right when the crack era was in full swing. From those days until now we have experienced so many things and nothing has seemed to pull the community together to correct itself. There has to be a limit somewhere.

I have my own personal limits to what I will and won’t do. In any situation I can feel if I am taking something too far and pull myself back. I got that from my family who set expectations on a certain level of behavior. I know there are a lot of black families who have the same expectations and standards. There are reasons I may not be smart enough to figure out that makes it seem like it’s impossible to spread this around to the community as a whole. I think the downward spiral started when we made the decision to embrace hustling and getting money above all else. That’s how drug dealers got to thrive for so long in our neighborhoods while destroying them. That’s why mothers let their sons stay out all night doing things they shouldn’t do to buy tennis shoes and clothes because they think he needs those things to be somebody. That’s why our young ladies love those guys and why Rick Ross can get rich faking like he’s one o f them. How was he supposed to know a line about slipping a molly into a woman’s drink was going to piss anyone off? He may have performed that song live a few times and the first three rows full of women were singing along with him.

You should never say anything that indicates it’s okay to have sex with a woman without her consent. I’m not a fan of Rick Ross and its okay for people to go after him for awhile but let’s keep it all in perspective. Unless we make some tough choices and have the family argument we need to get these things corrected we are headed for a full blown rape song.  Anything is possible when the game has no rules.
Posted by Clifton at 3/29/2013 11:14:00 PM 2 comments:

2013 has gotten off to a rocky start. First, my take home pay was reduced when the Medicaid tax cut expired. Second, my take home pay was reduced when my private insurance went up again just because they could do it. The only thing more expensive in this country than potential illness is actually being sick. Maybe I’ll get some of that money back when the insurance exchanges kick in next year. I’m not optimistic about it since I live in Louisiana and our governor seems to be trying to do all he can to make sure everyone has to pay as much as possible for healthcare.

When I found out that our insurance at work was going up again I thought about not signing those papers. I figured I’m young enough where I could make it a year or two without coverage. The extra few hundred dollars in my pocket would be good. I eventually sucked it up and agreed to keep paying because anything can happen in life no matter how old you are and if I really needed medical attention I would rather be faced with coming up with the money to cover the portion my insurance won’t or going into complete financial ruin by having to pay for everything. After the country almost broke out in another civil war behind healthcare legislation a few years ago, the fact people are still making these kinds of decisions makes all that seem like a big waste of time.

Now we are all in the middle of the sequester drama. I don’t think my job is affected in the short term but who knows what the future holds. I guess it will depend on how Congress and the president feel about the homeless. There's 96 million in cuts to homeless assistance programs so I guess they don't feel that good about it. I'm sure if the budget was slashed and my position was eliminated I can get one of those great private sector jobs if the freeloaders who are laid off sooner haven't taken them all. Everyone in Louisiana will have a great job from a Fortune 500 company once the governor frees them from the burden of corporate taxes so I'm not worried.

I don’t really understand why Democrats would have ever agreed to this in the first place unless they wanted it to happen. Nothing has forced Congress to move from any of their positions on spending in the last few years. They gave in a little during the Fiscal Cliff crisis and were acting like they sold out all of their values. They weren't moving on the sequester deal. I think they threw the military cuts in the deal to give the GOP a reason to cooperate and even that didn’t work. It seems like he’s been talked into more unnecessary financial crisis and every time his opponents get more and more of that they want.  He gave up his biggest playing card when he didn’t let the Bush tax cuts expire. He would have had the same hate towards him and the same attacks on his character only with half the deficit that would be steadily shrinking. I support the president but something is wrong when he can't get one long term financial deal done while President Bush got two wars funded, a tax cut, and a bank bailout while the deficit was growing. It makes you think the current administration is taking the wrong approach. I'm not smart enough to know what the right approach is but the current one doesn't seem to be working.

I always have a lot on my mind and I used to write about it to let it out. I’ve shared a lot of my personal feelings with the public. I’ve tried not to do that as much lately. Sometimes I think about some of the blogs I posted and how personal they were. I’m not sure if I would write some of the things I did in 2006 and 2007 in 2013. When I first started blogging social media and self appointed spokespersons weren’t as out of control as they are now. There are two issues that I have a problem with. The first is that people can take something you say out of context and run with it without you having a chance to explain yourself. I guess that’s the price you pay for sharing your opinions in the first place. The other issue is some people are labeling themselves as an example of a particular way of life or ideology. There are a lot of people trying to become famous by being the voice of the “intelligent black man”, or the “strong black woman”, or the “New Orleans expert”, “black fathers”, or “the hood” and any other niche you could think of. I never wrote anything to try to be the voice of any of these things.  I’m just trying to be Cliff and not mess that up too much.

I don’t have a lot of guys in my inner circle. I’ve never made close friends with guys that easy. I had more friends when I was younger but life and time has made that number even less. I value those guys like family so to lose one is a devastating blow. A few weeks ago I lost one of them in a truck accident and the world seems a lot less fun. I want to close this post by saying rest in peace to Black Chris. I think about him every time I have a really crazy thought during the day and I need someone to share it with. I don’t think I’m ever going to have that kind of routine with another friend again because I wouldn’t let anyone cuss at me the way he did.