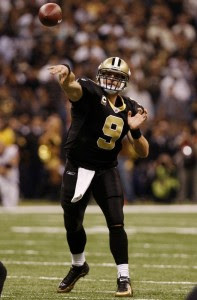 I’m not ready to talk football yet but I am glad Drew Brees got his contract signed. I still don’t think this season is going to be that good because the coach is suspended but we’ll at least have a punchers chance. I knew Drew wasn’t going to give the Saints a discount because he owes it to the other players at his position to keep the market rate going up. Peyton Manning set the scale for Drew’s contract and he just set the scale for Aaron Rodgers. With teams giving out this kind of money to quarterbacks there’s no way they are going to let anyone hit them hard enough for injury. Whatever the record is for roughing the passer penalties the 2012 season will shatter it.

I’m going out of town for a few days. Despite the humidity, random thunderstorms and the chance of getting shot on a public bus I don’t really like leaving the city. I guess it’s always good to get away for a few days and see something different. I was going to mention in this paragraph how the site of a shrimper selling fresh shrimp out of his truck in Gentilly today was heartwarming but I don’t want to sound like a BP commercial. I hope the hotel I’m staying in has Cartoon Network. If not I am going to miss the premier of Black Dynamite Sunday night.

I went to a healthcare forum sponsored by the National Council of Negro Women on Wednesday night. There was a lot of talk about the healthcare act. I learned a lot about it that I really didn’t know before. It actually made me feel more positive about it. There were other people in the audience that had the same question I did. How come know one seems to know about all these good things? The media spent so much time quoting politicians and so little time explaining the bill that I can’t be mad if a lot of Americans are not as informed as they should be.

Some people are upset with Mitt Romney about using the NAACP to gain favor with his base. I am sure he went there to be booed as loudly as possible. Later that night he made a speech in Montana and used a quote about people wanting “free stuff” that he used before in speaking about other groups.  This allowed him and his supporters to pull out old quotes and dismiss the racial intentions of what he said while triggering racial tension at the same time. It was a shrewd political move. Very few things are out of bonds when you are running for office these days so I am not upset with Mitt Romney. I’m upset with the crowd at the NAACP. Have they been paying attention to the last four years? What did they think he was there to do? The best way to respond to his words about the healthcare bill was to not do or say anything at all. They should have just sat there like a bunch of zombies and left the used car salesman to come up with a way to save face.

Life can be challenging as you navigate it. At the end of the day everyone is just a combination of good and bad choices. In most cases death has a way of taking the edge of off the bad choices we’ve made. A lot of people who did things that weren’t so good get a break when they die. Death shakes humans to the core so much that I think we talk ourselves into making people’s actions not as bad as they actually were. I’ve been trying to think if there’s anyone who’s had their legacy changed from one extreme to the other like Joe Paterno. At this time a year ago Joe Paterno was considered a symbol of integrity and good values. In all the years of following college football I never heard anyone say anything negative about him at all. Now he’s passed away, a report funded by his own college said he protected a child molester for years and people are removing his name from buildings that were dedicated to him. It’s unbelievable. It’s the kind of thing that makes you question everybody.

It's risky for society to build people up sometimes. No human is above doing something wrong and we probably shouldn't hold anyone to that standard. At the same time I don't think we want to get to the point where we have no hope in people at all. If no one has help in society then the world just becomes one big ghetto and no one wants to live like that.

Sitting On My Porch Part Eighty One


There’s a lady that cleans up the office building I work in. She’s one of the nicest and most positive people in the world. I hear people complaining all day about their jobs and this lady always has a smile on her face no matter how messy people left things behind for her. I’m guilty of that sometimes. One day I had all kind of small things on the carpet and I wanted it vacuumed. I also had an extra three bags of trash because I was cleaning up my office. I left a note on the door asking for someone to vacuum the floor and just in case the person reading the note would be pissed off I apologized for the extra trash. Not only did she vacuum the room but she left me a note that says “Have a Blessed Day”. I kept the note on my desk to remind me to stay positive. Unfortunately I have never asked her name but I hope she enjoyed her holiday.

This summer has been about me trying to get myself back together physically and mentally. I’ve been trying to clear my mind and not think so much. I want to relax as much as possible before the school year starts again and the routine grind comes back.That’s why I haven’t been posting much. I feel like sometimes I let things that I have little or no control over bother me to the point where it affects my quality of life. Sometimes you have to get away from those things and chill out. Plus when you have been maintaining a blog for eight years in a world where nothing really changes you always feel like you are repeating yourself.

On the physical side I’m trying to get into better shape since I went to my 20 year high school reunion and everyone looked like they were the same size they were back then except for me. I was already trying to motivate myself to live a little healthier. There’s nothing like looking like the pregnant dude in the reunion pictures to finally push you to a commitment.

I have to make an appointment for a physical soon. I will use the health care that I and my employer pay for. We are exercising our freedom to be overcharged every year for those policies so I may as well get something out of it. I had forgotten all about the health care bill until the Supreme Court and Chief Justice Roberts brought it back to the forefront.  Democrats took a victory lap while Republicans felt like they were betrayed by Justice Roberts. Everybody needs to relax. He still helped the Citizens United decision go forward and that was the real killer to the voice of the people. I know we live in a time where you have to agree with everything your political side thinks and no one is allowed to have their own opinion anymore but this one decision does not make Justice Roberts a traitor. He’s not going to try and restart ACORN or anything.

I was trying to think of an example in every day life that would compare to Mitt Romney campaigning against a plan that he thought was good enough for all of his constituents in his previous leadership role and now that he wants a bigger job he has to basically attack his own creation. The whole situation is baffling to me.

The one thing we never really address through all of the conversations about health care is that we wouldn’t need a health care bill if insurance and health care itself wasn’t so high. There is no phase of health care in this country that is affordable without some kind of help. Regardless of your politics or background, if you or someone in your family gets sick for a significant amount of time you are going to have problems paying those bills. The reason we need a rule about preexisting conditions isn’t because those people wanted to be taken care of by the government. It’s because insurance companies knew eventually they would probably have to pay for something related to the condition so they were actually turning down people who wanted to give them money. If you are trying to do the responsible thing and buy insurance and no one will give it to you then what are you supposed to do? That’s why I was hoping for a public plan in the bill to keep insurance companies from going up every year.


The New Orleans tourism commercials are really corny. The only thing worst than those are the BP commercials where their representatives talk about what their doing for the Gulf Coast like they didn’t cause the problem in the first place.

Every day I check the news for a Drew Brees contract signing or a Jay Electronica album release date. As of today I haven’t gotten either one.

I also try to avoid BountyGate talk everyday. It’s the story that won’t go away. With the exception of the Katrina season and sitting in the Superdome watching Mike Ditka coach, this is the worst Saints story I’ve had to deal with.

Every now and then a song comes out and I think it’s a really stupid song but I can’t stop listening to it. I get mad at myself for playing it so much. Cashin Out is one of those songs. I need to get this song out of my head.