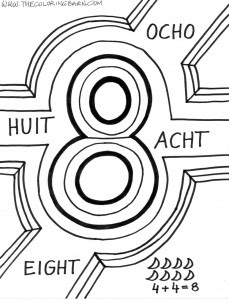 This blog is now 8 years old. A lot of blogs have come and gone during that time. I can’t think of too many sites I used to like 8 years ago that is still around and if they are they are not the same.  Other than the 50 different template designs I have chosen over the years I think I’ve been pretty consistent.  I tried a few website word counters to see just how many words I have written on this page. I didn’t come up with a good total but I am guessing there are thousands of words that featuring my thoughts, struggles, comedy, pain, tragedy, pride, and all the other aspects that make life what it is. Some of it was real good. A few of them were real wack. I'm sure there's a few things I shouldn't have posted. Hopefully someone got some entertainment or enlightenment from it.

Besides getting to know some cool people and opening doors to do things like a segment on CNN, the one thing I have gotten from doing this is a higher respect for people who write professionally.  It’s one thing for a person to keep a journal or a notepad at their house to scribble their thoughts in from time to time. That’s private and personal. If things went south for me or I said something I shouldn’t have on this blog I could always hit the delete button and get rid of the words or the entire blog altogether if I needed it.  It’s a whole other level to express how you feel about something, entertain people with it, take their criticism, then shake that off and do it all over again. This is especially true in the Twitter age where I see writers take a beating from the public and yet they keep putting things out there.  I have admiration for everyone who does that even the ones I don’t agree with.

I was going to let the Crib retire but I can’t do it until I sit on my porch 100 times and this Saints season is over. The Post Bounty-gate season will be too interesting not to have something to say about it. In honor of my eight year anniversary I want to give everyone eight things to use for blogging and life.

1.    Never react to the first version of a news story when you see it on the Internet. The rush to be first to break a story means that some of the details may be missing at the beginning. Wait at least 24 hours when all the facts are there.

2.    Never assume you have reached an age where the things people do should make sense. Stupidity doesn’t have an age limit.

3.    Unless you have enough resources to live and support your family, never say anything that will cause you to lose your job unless talking about certain things is your job. That’s not selling out. That’s being realistic.

4.    You may be the only person around that feels strongly about something the way you do and that has to be okay.

5.    Putting your favorite Internet model’s name in multiple blog post hoping one day she would be vain enough and Google herself, scroll through the results, see your page, then send you an email so you could become friends doesn’t work.  If Buffie sends me an email later we’ll just take this one out.

6.    You never know who is watching, reading, or listening to what you say and do. Make sure those things reflect who you are and what you stand for as much as possible.

7.    You can never place a high enough value on having good friends and having a good reputation.

8.    As much as you try to fight time I can’t. You can’t go back in time and you can’t stop it from going forward. All you can do is make the best of what’s going on right now and try to make the future better.

Congratulations on 8 years. I admire your writing. thanks, sp

Happy Birthday, Cliff's Blog and thank you for wise advice.

Congrats Cliff, 8 years is a long time. Keep it up!

I was just itching to know do you commerce featured posts? I’m all the time trying to find somebody to make trades with and merely thought I would ask.

It's great passing eight years of your blog .

i just found your blog from google its great.

thank you very much i like too read your blog. And happy birthday

BurrellesLuce is the leading clipping path service provider for all your print and online news. Call us. BurrellesLuce understands media. Learn more about our comprehensive suite and services.

Thanks for sharing the information

Thanks for sharing this information. It is very nice Article.. Clipping Expert Asia Provides best image masking and more other services..if you want know click the below link...

Thanks for sharing this nice post. We provide high-quality photo retouching service at a cheap price.

Congratulations on 8 years. I appreciate your writing, thank you so much. Happy birthday to you.... eCommerce product photo editing thanks

Quality content is the key to interest the users to go to see the site, that’s what this web page is providing.


I gotta bookmark this website it seems extremely helpful very useful. Thanks for sharing.

Really clipping Path service related article is very Useful and helpful .Lots of Thanks for sharing such a nice post.

That was a great and comprehensive article…all the tips enumerated and explained will be helpful for those who are wise enough to tap from it. Any business nowadays without social media signals and presence may not make it to the outermost, and investment too is part of the key to success in business. Keep up the good work.

how to make a transparent gif in photoshop said...

Great content. Thanks for sharing this nice content with us. We are one of the leading photo editing service provider. Some of our popular services are
Clipping Path service
Background Removal Service
Photoshop Image masking service
Prodcut Photo Editing Service
Color Correction Service
Image Retouching Service

Astonishing, astoundingly valuable post I appreciated it and wish to see more posts like that structure this blog, I adored this blog this perhaps helpful to me as I additionally have a Photoshop Clipping path service site where we give all kind of Photoshop services and to give tips on Photoshop a clipping path blog i made is a nice way to learn different tips on photography and illustrations designs.hope to get increasingly valuable post Form this blog😊

Hey! This is the best blog. I am really impressed. Keep up the excellent more post in future. Thanks for Thanks for sharing your post.
Photo Retouching Service Provider

We are providing high quality clipping path and image editing services all over the world.

Well done! this is a birthday party blog for information. I really LOVE it. Thank you for share.
Clipping Path Service
Photo Editing
Photo Retouching

Do you know what is others in storage Android? All the uncategorized files in an Android smartphone’s internal storage are stored as “Others". And the files in the “Others" folder are filling up space in your phone memory. You can check what files are consuming space in the “Others” folder in your handset and can free up some space deleting unwanted files. You can get a full understanding of what is others in storage Android on Fixwill.com. Here are the tips to delete the files that you don’t need.

Congratulations on running your blog for over 8 years now.
Buy Verified Neteller Account

FixingHacks said...
This comment has been removed by the author.
Sunday, December 05, 2021

Android app telephonyUI is synonymous with InCallUI for Samsung units. Now you could possibly request about what InCallUI is. com.samsung.android.app.telephonyui is often a feature of Android gadgets that can help to Exhibit the dialler, route the phone calls, and switch audio in between the calls. It works among the Android running procedure and Com.Samsung.Android.InCallUI. This service is liable for building the phone calls from SIM playing cards and VOIP connections.

It's really nice to read and very informative. So much thanks for the sharing. I was looking for that and this is very important for me. Thanks!


So much thanks for the sharing. I was looking for that and this is very important for me. Thanks!

Though pretty common these are some great advices ever. Thanks very much for those emotional talks. This is very nice.

How to Photograph Furniture said...

Thanks for sharing this blog.

This is a unique blog.

It's really nice to read and very informative. So much thanks for great efforts.