A Moment of Pride 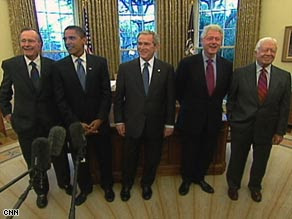 I will admit that during the presidential campaign I was never overly excited about Barack Obama. I was too aggravated about things going on around my city to really let go of my anger to let the hope movement affect me. Regardless of all of that, I never thought I would see a man that looks like me being elected president and running my country. There’s no way I can not get caught up in watching him take that oath. I am going to work Tuesday but as soon as he steps forward to put his hand on the bible everything is going to stop and I will take that moment in and try not to cry. Since Monday is MLK Day and Tuesday is the inauguration, I’m just going to take this time to be black, proud, and optimistic about what the future could be for . I think enough dues were paid for everybody to let go and bask in the moment.

There are only two things that you can’t do. The first thing is you can’t get fired from your job trying to take off from work to watch the inauguration. The man has a hard enough task as it is without you adding to the unemployment rate just to watch the speech. Trust me, it’s going to be replayed all day so if you don’t have the time off then don’t do anything crazy.

The other thing is that while he’s speaking you can’t forget the Emancipation Proclamation, the March on Washington, the Civil Rights Act of 1964 and the Voting Rights Act of 1965. Think about all the people who sat at lunch counters, marched, and gave their lives just to have a chance to see things like the inauguration. You have to remember that because acknowledging your foundation is how you get the strength to do the things you need to do because Wednesday morning President Obama has the keys to the house and that’s a whole different ballgame. Tuesday is just the beginning and you have to be even more engaged than you were during the campaign.