Maybe This Is The Final Straw 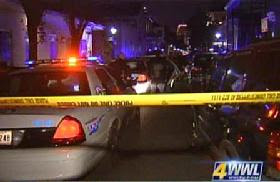 By all accounts Wendy Byrne was a great person. Her life was taking after an armed robbery went bad. Just like the stories earlier this month, the community should feel down when things like this happen. The beginning of the year has been a rough one for stories like this. The assailants were three 15 year old boys. They will be tried in court as adults. The two boys that are already in custody were turned in by their mothers after seeing their sketches on TV. Although people are dogging the mothers on messages boards and comments(That's why there are no links on this post.), maybe those ladies are just tired of the violence and decided to do the right thing by making their sons accountable. The person that gave the description of the teenagers to the officers had to be scared but maybe they wanted justice and decided to overcome the fear and talk anyway. Our police chief Warren Riley said the kids should never be allowed to walk the streets again after killing an innocent woman. Maybe he’s finally had it with all the violence and is going to speak out like this all the time. The district attorney had a press conference earlier to keep everyone updated about the status of the case just to ensure the public that justice will be served. Maybe dangerous criminals won’t get out after 60 days because the cases against them weren’t together. Maybe Ms. Byrne’s unfortunate passing and the reaction to it will encourage every witness, parents, the police chief, the district attorney and the press to react to every case like this all year long no matter who the victim is so we won’t have to read about 200 more murders. I’m just trying to keep this hope thing going surrounded by all this drama.

And perhaps then the police will promote the victims' fund more as well:

It's a shame that this kind of outrage only happens when the victim is white.

Unknown said...
This comment has been removed by the author.
Friday, January 23, 2009

Dineral Shavers? The brutally murdered 2 year old? I think there's outrage pretty uniformly when it's a "civilian" that gets murdered.

Not saying it's right or wrong, but that I think class and neighborhood has a larger role in the outrage than her race..not to say it doesn't have a part. It would be naive to believe that an innocent black male would get the same attention. On the other hand, a baby in a dryer got a short mention twice in the TP, and that's it.

Fear not, this will soon become a memory after Ray Ray's next zany quip and we've moved on to the next thing.

Am I foolish to think that the decision of these mothers' decision is an important turning point, or has the potential to become the spark of one? Was it just fear that the NOPD would turn heaven and earth to solve a murder in the tourist zone and catch them anyway, or a genuine statement that Enough is Enough?

I hope Cannizaro (and Riley) realize that if this falls apart like the Shavers' case, it will be a tipping point for many in the city, but not the one we have all wished for.

Mark,
Your outlook isn't foolish at all but we don't know for sure. Honestly, since Chief Riley's reaction to this particular crime was so drastically different from his usual demeanor, I think those parents might have turned the kids in because they were scared what would happen if the NOPD had to come and look for them. They either had to turn them in or run away from the city and never come back. That's why it's a good thing if he reacts like that all the time.

I don't know what made the mothers turn in their sons, and frankly, it's disrespectful to speculate. They did the right thing, whether conscience drove them, or fear. We ought to remember that they, too, are enduring their own tragedy. I can't imagine what it's like to have to live with the knowledge that you raised a child who for no good reason, murdered an innocent human being in cold blood, stealing that person's future, the possibilities, the joys, the happiness, the search for meaning. And yes, the boys themselves are a tragedy. It's easy to quickly judge murderers -- and that is a normal reaction. At some point, no amount of social depravity could ever justify the personal decision and act of pointing a gun at another human being and pulling the trigger. Nevertheless, those kids shouldn't have been on the streets running with guns. And yes, their mothers may, or may not, be complicit in their behavior.

But what of our own complicity? Has our society sought justice in a way which benefits all? Or do we reward the rich for their crimes, while punishing the poor for their honest struggle?

We just spent over $700 billion to bail out financial institutions which are holding on to the money to shore up their own finances, and to take over other companies. This is happening at a time when stocks are cheap. How much power is being concentrated in the hands of a tiny minority, subsidized by the taxpayers, and sanctioned by a democratic process?

It's all connected. Power and greed produce inhumanity and violence.

I mourn for Wendy Byrne as a singularly tragic loss, and I mourn for her loved ones, but I also mourn for all who suffer injustice.

Brian,
I agree with what you said but I don't think anyone was trying to be disrespectful by speculating. I think it's just one of those things that surprises people because in recent history things like that haven't been happening. It's even stranger that all three of them did it. I respect those ladies for turning their sons in but its out of the ordinary.

I talked to my mom about this situation. and I feel like this. at 15 years old, I'm glad he's being tried as an adult. Why? because at that age, many kids think that they are grown. especially when they are in a household where the parents don't have much authority.

Those guys weren't doing it for fun. murder was on their minds. at 15 you Know what the Consequences are. it wasn't accidental. There isnt a reasonable excuse to kill anyone.

having the Mother Call in was better than trying to find a witness, why? because this is New Orleans where everything is seen and heard, but nobody says anything.

Even In the French Quarter/Marigny Area. The Police don't even File reports when the crime doesn't end in Murder.. which is SAD , but hey thats them..

I suspect the mothers did the best they could possibly raising a child alone. Maybe these moms turned their kids in because they are moral people who believe in the commandment "Thou shalt not kill", maybe they aren't crack mamma's looking for money to support their habit, as is the stereotype.