The Struggling Bowl's Tale of the Tape 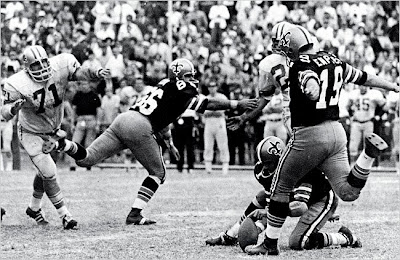 On Sunday afternoon the New Orleans Saints will visit the Detroit Lions in the Struggling City Bowl. Both cities could use a win and a pick me up. Which struggling city deserves the win the most? Let’s add it up.

might need a win more than we do but if this bailout goes well and the automotive industry recovers most of their citizens will be making over 75.00 an hour. There are not many 75.00 an hour jobs in . If you make 75.00 an hour in you can actually live in a neighborhood city government cares about. You might be able to buy your way into the Rex Parade as long as you look the part.

Both cities have had embattled mayors but I give the edge to us in that category because Kwame Kilpartrick actually went to jail. People hate Ray Nagin but he’s never done anything illegal (although you can’t make some people believe that) and it’s a good thing because if he did there wouldn’t be a story about that wouldn’t start with his mug shot. The majority of those would come from our own local media.

Speaking of media, I am certain that if the Saints were 0-14 there would be news stories on every channel citing negative things about the city that have nothing to do with football and sad players. Somehow the Lions have managed to be 0-14 without any mention of , Nissan and Honda kicking their butts at car making (Just for the record I drive a Chevy truck). The media advantage goes to Motown.

We both have one of the Bullocks twins playing safety for our teams. We will call that a draw in aggravation.

Both cities have a large black population with lots of history. I’m giving us the edge because we created jazz and they never would have had Motown without that.

They get bonus points because the suburban and affluent areas don’t seem to be turning against the major city. If that crisis was happening here our suburbs would be openly campaigning against the city to get the companies to move across the lake or over the river so they could get away from the low income people with their crime and crappy schools.

In the end I say we are the more struggling city and deserve to win. They just got 17 billion out of President Bush while we have to beg for every dime even though government failure caused our disaster. Even when we get money it has to go through 20 different hands before we ever get to see it. I don't get any pleasure in seeing other people struggle and there were too many jobs on the line for the bailout not to happen. I'm glad the Big Three got their money but why are we always begging for every dime when we didn't control what happen to us? The Saints really deserve the embarrassment of losing to the Lions for choking so many games and ruining the season but as long as they have attached to their name they will always represent the double standard that every other city in has over us. That’s why I say screw the Lions and every other city in the NFL.... GO SAINTS!

Now watch they go up there and lose so we have to watch clips of all the teams that broke losing streaks at their expense followed by a clip of someone stealing beer during the flood. This season can't end fast enough

The Saints won, but your kicked ass.