Big Wins Are Cool Too 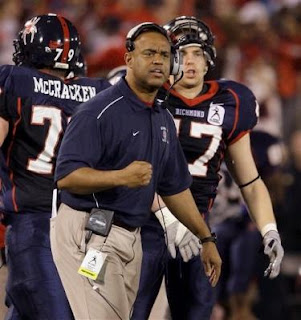 Friday night I was feeding my football habit and watching the NCAA Division II championship game between Richmond and Montana. I am one of those people that love college football so much I can watch it from early Saturday morning until I fall asleep that night. I follow college football all year round but I didn’t know too much about Richmond or Montana to pull for anyone. The announcers told the story of Richmond coach Mike London and I started rooting for Richmond.
Here’s a brother that’s a good husband and father. He was an undercover police officer. He left the force to start coaching again. He had to give his bone marrow to his daughter to save her life from a serious illness. Now he’s back coaching at his alma mater after years of being an assistant. Even the Montana coach admitted that it was hard preparing for the game because he is such a good guy. Richmond won the game 24-7 for their first national championship in school history. Coach London was overwhelmed with emotion at the end of the game. Good for him. I didn’t know who the brother was before tonight but I was happy for him. My daddy used to always say that sometimes a good man has to do the right things and feel good about the small victories. He was right but there’s nothing wrong with a good brother getting a big victory too.
Posted by Clifton at 12/20/2008 05:32:00 AM