Fun and Violence Don't Go Together 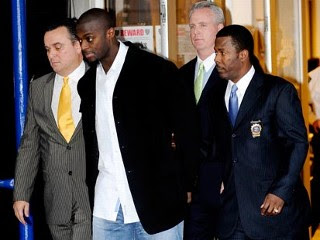 Back in the hood history of there was a nightclub named Rumors. Rumors was the most popular night spot of my generation. It was one spot that attracted people from all parts of the city because of it's energy. I myself only managed to visit two times. I only went through the door once. Besides not wanting to be around that many crazy people, the reason I never wanted to go was I couldn’t have any fun under the constant threat of violence. Week after week there would be stabbings, shootings, assaults and all kinds of other madness and the same folks kept going back. How you have fun under that kind of tension always puzzled me. That’s why I don’t understand when things like getting arrested for being in a club with a pistol happen to successful cats like Plaxico Burress. Actually, even if he wasn’t making millions of dollars a year it would make no sense.

When you grow up in certain areas you expect having to fight from time to time. It's very difficult to make it all the way through with a conflict here or there. It’s part of the environment. You might have to fight on your way home from school or on the way back from the store for your mom. It's not really an option. I just can’t get with the premise that a person gets up, puts on his best clothes to go out for fun but before he leaves he grabs his pistol because someone may be tripping in the place he’s going. That’s not a good time. All you need for a good time is strong drinks, friendly women who smell good and music you like. If you have enough friendly, good smelling women you don’t even need the drinks or the music. I’m sure members of the New York Giants can get whatever accommodations they want without the need for being strapped. Brothers with money and access have to stop putting themselves in ghetto situations because I am tired of seeing the brothers in handcuffs.