Another Case of Bad Karma 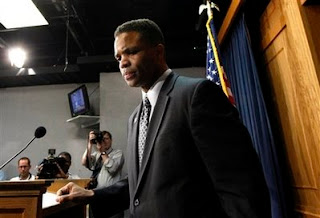 This story about the Governor of Illinois Rod Blagojevich is great. This is the kind of story New Orleans residents use to feel better about themselves. I am just sitting back and enjoying it. This guy should be ashamed of his language. The government had Edwin Edwards on tape with all kinds of people and there were no cuss words. Cleo Fields didn’t even cuss when he realized how hard it was to stick ten thousand dollars in the pockets of tight jeans. You know these tapes are going to leak to the public eventually. The least you could do is be clean about it so the kids can watch it on the news. Also, you are not supposed to get sloppy until you have made some money and laundered it already. Why destroy your political career and not have any money in a Swiss bank account.

The best part of the story for me happened yestersay. Remember when Jesse Jackson Sr. went crazy and talked about chopping off the parts of Barack Obama that make him a male? Well as crazy and deranged as I thought that was I couldn’t help but be shocked at how Jesse Jackson Jr. would publicly rebuke his daddy. I’m old school when it comes to this family stuff. If Big Cliff would have done something as crazy as Jesse Sr., I would have gone to the house and talked to him about it. I might have tried to talk him into apologizing but I would have never talked negative about my daddy in public. There were enough people chastising his dad where he didn’t have to. He did it to gain favor with the Obama machine so he could get that senate seat. Now he’s Candidate #5 and can’t get the senate seat anyway. He probably didn’t do anything wrong and I really hope he didn’t. You know whats funny? If he was really in trouble the first person who would be standing up there with him everyday on the way to trial would be his crazy daddy. This little scare should be a valuable lesson that bad things happen when you talk down to your parents no matter how crazy they are getting as time goes by.
Posted by Clifton at 12/11/2008 07:00:00 AM

Brilliant observation! I know that some mmmmhmmm-ing is going on in his inner family circle, especially amongst his auntees and what not. LOL

although we shouldn't count him out just yet. It doesn't look like he can be appointed but they're talking about scrapping the whole appointment process, impeaching the guv, and holding a special election for Obama's seat. Jackson could very well still win. But he'd better do some supplication to the ancestors to offset that mouthing off from before and move the benevolent forces back in his favor:)

Rod Blagojevich's taped conversations sound like Joe Pesci lines from "Goodfellas" and "Casino." Joe Pesci is too old to play the governor when a movie is made about this scandal, but in his younger days he would have nailed the role.