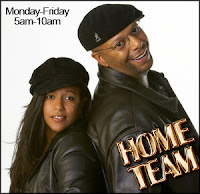 Look, I know "Why Come" is improper English but it was "Why Come Wednesday" on 102.9 here in the city. Since LBJ and Kelder are the last local morning show since Q93 dissed C.J. Morgan and replaced him with Steve Harvey, I felt like using the term as a tribute. I don't want any of you English teachers sending emails trying to correct me. That includes my sister who has never used slang in her life.

Why did my co-worker brought her own cake to celebrate her last day today?

Is it wrong for me to want my money back for the cake and gift we were going to surprise her ass with?

Why do I feel like the only black guy in New Orleans that doesn’t own a pistol?

Why do sometimes I feel the need to go and get one sometimes?

I have been reading the Unified New Orleans Plan and I like it. I think it's pretty well done and covers everything. But why do I not have any confidence in leadership here getting it done?

Why are the policeman accused of a capitol offense going back to work? What if they are guilty? They don't let regular people that get accused of murder go back to work when they are arrested for capital murder. Warren Riley should have left them on leave until this thing was over.

Am I the only one that thinks it’s cheesy that women have personal web pages with pictures of their children right next to a picture of themselves in a thong? That don't match.

What the hell are Tyra Banks and Serena Williams doing defending those thick bodies to the mainstream media when they think the Olsen Twins are sexy and they weighs 20lbs combined? You guys need to start hanging out in the hood again.

How long will it be before a disc jockey on a black radio stations snaps and admits he or she is tired of playing the same three songs all day long? They can’t like that Irreplaceable that much.

Will my blackness make me vote for Barak Obama for president even though I am not sure he is going to do a good job?

Am I the only black man that finds it depressing when I walk into a convience store or grocery store and some guy who obviously has no job, is standing over his girl's register while she is trying to work watching all the customers to make sure she isn't flirting? She is supposed to smile you dumb ass. She's working with the public. You are the kind of fool that gets his woman fired then gets mad when she can't buy you the new John Madden game. She's a fool for letting you stand there all day but she is probably scared to tell you to leave. She shouldn't be with your trifling ass in the first place.
Posted by Clifton at 1/31/2007 03:18:00 PM