The Price of Staying Down 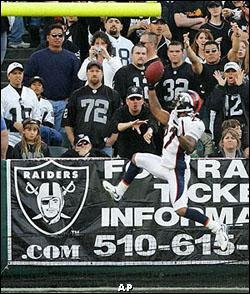 On Sunday night Darrent Williams a cornerback for the Denver Broncos was shot and killed in his limo in a drive by shooting. According to reports, Williams did not have anything to do with the confrontation that led to the shooting. I’m sorry a young brother with a bright future lost his life to senseless violence. Many young brothers lose their lives and future to the same kind of violence everyday on the streets. I place no blame at all on Brother Williams. He was just a young man out trying to enjoy himself and he should be able to do that. The question I do have is why does it seem like young, rich black people with legal money seem to hang out in the same circles as thugs anyway. I see photos and clips of young rich white people out all the time and no one ever gets shot. The reason is because they only associate with other young rich people and there is nothing wrong with that. You never hear about Paris Hilton and Britney Spears getting caught up in a drive by with some trailer park trash. Only young successful black people seem to want the same status as hustlers. In the black community, hustle money is legit money so you can get access by being paid even if you are a blatant criminal. You can even get the same status and women (something else I don't understand) entertainers and athletes get. The object is not to get up and get out but to get money. Call me a sellout if you want to, but if I get my hands on a few million you won’t see Pretty Toney n’nem at any of my parties. That’s the whole reason for trying to get paid in the first place. You are supposed to want a better environment than what you had in the old neighborhood. What kind of upward mobility is that? Besides, you can help the people of the old neighborhood a lot more if you are free and safe.
The NBA All Star weekend is always a ghetto fabulous event regardless of where it is. This year it’s in Las Vegas. I would not be surprised if some young famous brother got himself hurt trying to hangout with the leader of the Vice Lords or some pimp named Silky that weekend just to keep up his street creditability. We are all going to be there like one big happy family. Something is going to happen and no one is going to be surprised.
Posted by Clifton at 1/03/2007 09:21:00 PM