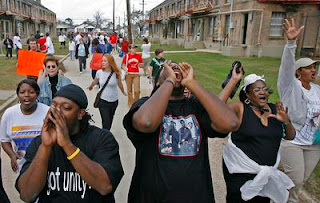 Image is everything in America. It can either make or break your cause. For instance, I have been a loyal hip hop fan since I was ten. Since I never really got into mainstream songs, I seek out good music to listen to that would never make the radio. I could sit here and name a list of talented brothers and sisters who are creative, enlightening and make some pretty awesome songs. Unfortunately they never make the radio and their videos never get played on MTV or BET. That means that the majority of people that don't know any better can only go by what the media gives them. They see hip hop as pimps, hoes, negroes killing everybody and only worried about sex and jewelry. That's the common image of the art form so now it's hard for the public to take things most hip hop artist seriously.

With that in mind lets go back to the St. Bernard Housing Projects in New Orleans, Louisiana. The former residents have been protesting to move back into their apartments. Last week, while the honest hard working residents of the complex were protesting, a few fools decided to disturb government property and tear down part of the gate. One of these fools was 25 year old Garelle Smith. You can read about this brother more here. Mr. Smith has been arrested 3 times for murder,including shooting Soulja Slim and countless other times for different offenses. Here is the problem. Ninety percent of the people who want to come home truly are homesick and just want to get their lives back to normal. The problem is that with the media attention in the city so focused on crime, you can't have people like Garelle Smith front and center at a protest when it's clear he is nothing but a thug. Nobody is going to support the good people coming back as long as fools like this are standing next to them in the fight. Next time you have a protest about coming home just get the old people like Ms. Gladys together and let them go out there.
Posted by Clifton at 1/26/2007 12:33:00 PM