The Truth about New Orleans Crime 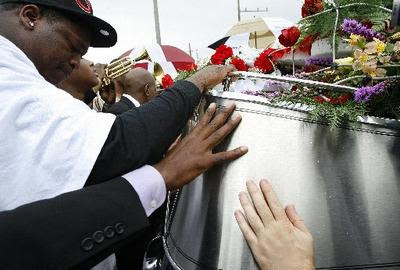 Once again New Orleans residents are marching on crime and demanding answers and solutions from local officials. This usually means that someone other than a young black teen was shot. The year has started really bad as there are more murders in the city than days passed. I have to admit that for the first time in my 32 years of living here I am kind of scared. There was a time when a person was murdered and it was drug related a robbery or there was at least an explanation for why the conflict started. Now people are getting killed and no one knows why. Citizens have every right to be scared and demand answers. After everybody marches downtown and some folks make speeches that get great applause and some camera time, we need to sit down and be totally honest about why crime is and will be at a high rate for a very long time. If we don't admit to these things then there will never be a true solution to fixing the problem.

1. The black community of New Orleans has been raised in and around a culture of violence for the last 100 years. We raise our boys and girls to fight for everything! It has always had a crippling effect on our community but it became destructive after the crack era and the lost of any type of family structure for many kids. We are dealing with a generation of young people that have been raising themselves since birth and have been fighting every step of the way. They have no social skills.
2. When you have a disaster recovery process that discourages homeowners and educated people from coming back home quickly, we had to know that the criminal element would come back first because they wore out their welcome in other places. Not only that, Central City was relatively dry and there was all kinds of murders there before Katrina. The city leadership should have known that and they let the same thugs along with some new ones go back and terrorize the same neighborhoods. Meanwhile, hundreds of teachers, nurses, and working class people are making their way in other places because they can’t find a decent house.
3. The way in which the state, and local leaders allowed us to attend public school in the conditions that we did and still do is immoral, criminal and racist. When I was in the 7th grade in 1986-87, my reading textbook (which all seven classes of reading had to share) was 20 years old. Would anybody be surprised if we didn't pass a standardized test created with material we had never seen? Kids from most New Orleans public schools make it in life despite that bullshit education and not because of it. You send hundreds of adults into the world without any skills to function in society and then you want to give them all the blame later like they were born that way. I refuse to listen to any government officials opinion on crime here until they admit that their failures for the last three or four decades helped contribute to this problem.
4. Ray Nagin, the entire city council, and anybody else that wants to get involved has to go to Washington and beg, plead, and demand some money for the criminal court system. I don't care if they have to go all the way to G.W.Bush himself they have to do it. I know this is asking for something incredible since our mayor only speaks once a month but we have to pay the attorneys and get things in order down there. I can't speak for everybody but I am not calling and reporting anyone if they are going to get right back out and come after me.
5. The black community has some serious problems but is too caught up with worrying about white people to take care of it themselves. In Central City there is damn near a murder everyday. The people never look as angry as the residents of The Marigny did last week when the doctor got shot. We have to stop accepting self destruction as a way of life just because we are disadvantaged. The time has come for us to admit that if Ms. Gladys grandson kills four people it's his own damn fault. We have to call and get his ass locked up. That leads me to number 6.
6. The New Orleans Police Department has never done a good job connecting with the community and can never really solve any crime problem. This has nothing to do with the color of the officer. The fact of the matter is that there aren’t a large number of people outside of the French Quarter and the Garden District that thinks the NOPD is here for their protection. Until we all figure out what needs to be done for citizens to embrace the police department there will never be the level of cooperation needed. One thing they need to do is get out of those cars and walk around. I think one of the reasons the National Guard hasn't had any trouble in New Orleans East is that they actually go in the stores and to the coffee shop like regular guys. They even say hi when you are next to them at the stop light or passing up your street. They are very not threatening even in uniform and hummers. NOPD officers always look like they are waiting to kick somebody's ass.
7. As much trash as we talk about wanting the streets safer, we can never really do everything we need because the need for tourist runs this place. Sure, a midnight curfew would probably help out the police a lot right now since there is a shortage of officers and they are trying to get things under control. There is no way the business community wants things downtown to shut down that early. They could always enforce a midnight curfew for all parts of the city except for downtown. That would lead to every bootleg community activist to jump up and shout that it's biased and unfair. They would be right too. Sometimes, you have to do things regardless of the money. If we are not willing to do that then let’s forget the whole discussion and keep being scared.
Posted by Clifton at 1/09/2007 12:07:00 PM

Great post, Cliff. It all needed to be said. I was trying to say #1 and 3 in my own half-assed way. What can we do to change this?

G, I actually read yours right after I wrote this and it made me know that I was very accurate. You did a good job. I don't know if you can do anything about number one. We dont have different genetics but it seems to be part of us naturally. If I was a well respected attorney like Thurgood Marshall or someone like that, I would file a symbolic lawsuit for billions on behalf of the children of New Orleans from 1960-2006. The plantiffs would be the school board, BESE board, the state and the federal government. I wouldn't really care about the money but the problem needs to be exposed. Of course, I am just a computer technician from the Ninth Ward so all of this could be a bad idea.

"I would file a symbolic lawsuit for billions on behalf of the children of New Orleans from 1960-2006."

Class action suits sound good to me. Seriously, I feel pulled in a million directions right now. When I figure something out, I'll let you know.

Thanks for reading me :)