Speaking on a Tea Party 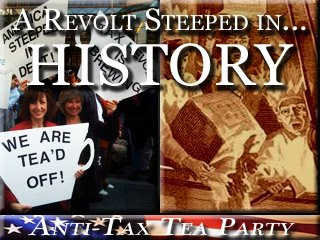 This morning concern citizens all over the country are supposed to be gathering for a Tea Party to protest the socialist tax policies of President Obama. This is not a very original idea. I guess the activist Republicans are taking a page from the activist Democrats and are starting to hold demonstrations to show their frustrations. I hope they have better success than the Democrats did because President Bush walked all over them for eight years. I could be wrong about this but I thought the original tea party in back in 1773 was a protest due to taxation without representation. The last time I checked anything decided now would be done by the elected Congress, Senate, and President of the that represents the majority. It's just a little strange to have a symbolic tea party with official representation attending. That's bass ackwards if you ask me.The fact that everyone at my job had an increase on their pay checks this month from a tax cut makes it all the more confusing.

I think someone could have come up with a different name for this event. Tea isn’t really that big of a deal unless it’s a long island. You can get a big box of Lipton for about three dollars. They could have named it the “Gasoline Party” or the “We Need Another Stimulus Check Party”. I would have gone to that one. The organizers of this event could be on to something. I think I am going to take an historic event and use it to my benefit too. Lets take the entire city of north across the lake to higher ground with no threat of flooding. We can claim about 100 miles of land for our new location and call it Manifest Destiny. Who cares if someone is there already.

This is the very best comment I have read on the "tea parties". Perfect rebuttal, perfect punch line.

Despite the unfortunate tagline that these people are out "tea bagging" as a form of protest, the "TEA" part of it has come to stand for "Taxed Enough Already," as I understand it.

Pat,
I think that makes it worse to me.

It seems worse to me also since everyone making under $250,000 a year is getting a tax cut. That's a lot of zero's and most working people. So who is really being taxed enough already?