Giving Back The Money Won't Make You President 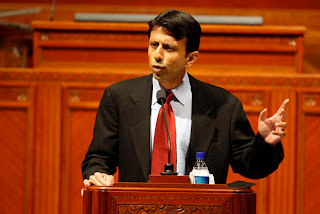 If you are Bobby Jindal and you really want to run for president, can you really expect to win with the decisions you have been making lately. As a matter of fact, if I was a Republican with any clout I would be on the phone with him right now telling him to accept all the stimulus money he formerly turned down. This is just my opinion but the fact that Mr. Jindal is the governor of is the worst possible thing for his resume running for president. I love my state but there is a lot of close minded people who still haven’t moved their thinking into the new millennium. You can turn down money designed to help working people in as long as it includes words like Medicaid, unemployment, uninsured, and assistance. When ignorant people in hear words like that they instantly associate it with poor, black or in some combination. There are some parts of this state that will name schools after you for turning down money when they think it’s designed to help us out. They will probably be applauding this move until they get laid off in the next few months and get that Cobra statement in the mail and see how much those health benefits costs when the job isn’t kicking in their percentage.

He’s not running for President of Louisiana. He’s running for President of the United States and if you look at the electoral map of the last election and just take the time to watch the news you can see that the majority of this country is in such an uproar about this financial mess that neither political party has any creditability and working people damn sure don’t want to hear anything about turning down money designed to help them out to give the same companies that are laying off people a break on taxes.

This is so opposite of what’s going on in most of the country. That’s why even with all the shouting and screaming from conservatives the president’s approval numbers are just as high. I don’t think many average Americans understand all of the plans but at least they feel like he’s trying to help them. How is Bobby Jindal going to convince people in , , , , and all those other struggling states to vote for the man that chose not to accept money design to help struggling working people in his state even though their tax dollars were paying for it regardless? I don’t think many people want that guy in a time of crisis like this.

Governor Jindal really isn’t doing anything outside of his basic principles. I will give him credit for being consistent but that’s my problem. If there is one thing we have learned over the last couple of years is that sometimes circumstances require responsible human beings to adjust their normal way of doing things until the rough time is over. When Bobby Jindal got elected we had a budget surplus that was over one billion dollars. Now we have a deficit and for the last few weeks our state has cut education, healthcare, and services to the elderly among other things. This looks like a time for an effective leader to acknowledge the situation, alter his thinking a little and take the money.

Thanks for putting my thoughts and feelings into words.

folk he will never be the prez lol

We liked the Gambit cover of 03/24/09. It's a stylized red/blue portrait of Bobby Jindal, similar to the famous campaign poster for Obama, and instead of "HOPE" it says "NOPE". http://bestofneworleans.com/gyrobase/