Do We Have to Play One More game? 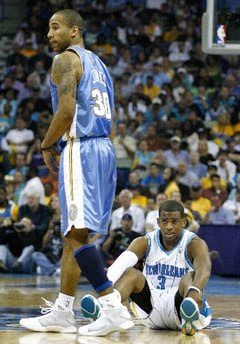 I would like to apologize to Chauncey Billups, Carmelo Anthony and the rest of the Denver Nuggets. After 30 years of being a New Orleans sports fan I know an ass whipping when I see one. I was trying to be positive even though we have a two man team. I know the series is not over and the Nuggets still have to win another game. I would like to think we are going to win the next three and shock the basketball world.

The only way that happens is if you guys stopped at Emeril's after the game and one of the cooks seasoned the BBQ shrimp with something that made the entire team sick. Other than that happening I see Chris Paul hosting a playoff watching party at his crib a little early this year.
Posted by Clifton at 4/27/2009 09:36:00 PM

I'm glad to see you're home again and writing so well. I liked the songs you left us. Here's one of my favorite songs for you -- and for Chris Paul!
http://www.youtube.com/watch?v=FpoyOwKJ1A0

On behalf of myself I would like to say this is a great song.

I think Chris is going to need something way more angrier than this.

I expect you're right about that. I sure hate the loss for his sake. He is an amazing player.

My husband told me the score and I damn near fell on the floor. That much of a loss? In the NBA???? Chris will need the angry music and MORE, I think.