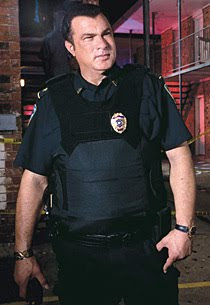 I just got through watching Steven Seagal Lawman on A&E. I have mixed emotions about this show. First let’s get to the positive parts. I love Steven Seagal’s movies. My whole family does. We named pets after characters in his movies. Under Siege is one of my favorite movies and I am almost tempted to go to Jefferson Parish just to get pulled over by Casey Rybek. I would sacrifice getting a traffic ticket to get and autograph for my mom. When the show comes on it says that he’s been a sheriff in this area for over 20 years and that just amazes me. I hate to put it this way but I know a lot of people who have been arrested in Jefferson Parish and somehow no one found out that he was a sheriff. During the first few episodes my only concern was hoping I didn’t see anyone I knew going to jail on national television. That brings me to my only problem with the show. Can the producers of the show diversify the suspects just a little? A&E is already the home of The First 48 that reduces my hope for the future with each episode. Does Steven Seagal have to bust young black males with their pants hanging off in every episode? Mix it up a little and let him break up some of those bar fights in Metairie.
Posted by Clifton at 12/09/2009 10:19:00 PM

Come on, Cliff. This is just bad. I really shouldn't say that; I should tell the truth. I don't much like Stephen Seagal's "acting" and anyway, this is very, very bad.

I'm waiting for Treme and hoping it will be a whole lot better.

My mom loves Steven Seagal's movies. Don't know what she'll think of this one. I know it's just so damn bad, especially when they show idyllic New Orleans scenes, then go straight to the mean streets of JP and the mega ego of Seagal in the middle of it all.

I'm waiting for Treme, myself. 'Til then, we've got the Zen Taser master singin' 'bout alligator ass and talking to his German shepherds in German 'cause they're, like, German shepherds.

Anita,
I can't believe you would be against an actor that can kill an entire drug cartel with a butter knife.

Haha! I wrote about the show last week and made fun of them for busting guys 'existing while black'. This show is so awful it's funny, but I'm getting annoyed by the busts. All of it is harassing black guys for carrying guns and possessing drugs, both of which I think should be legal across the board and not require a permit.

Anyway, Under Siege is one of my guilty pleasures too! But this is one of the campiest shows i've seen in a while. I've been live-tweeting it on twitter too.