The President Should Have Seen This Coming 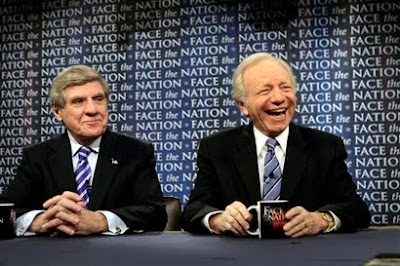 I know it’s still early in his term but I think it’s time to shake things up in his cabinet or get some new blood in an advisory role. I am not as smart as the president or any of the people around him but I can’t understand how any of those educated people didn’t see Joe Lieberman coming. Sometimes you can be too ambitious and ignore obvious human nature and rules for dealing with people. President Obama thought he could show the country that he was above partisan politics so instead of slamming his detractors he bent over backwards to make them feel comfortable. The only problem is that none of them cared about being bipartisan so they turned around and slammed him. If it was only Republicans from the Tea Parties and the Sarah Palin camp then I could chalk it up to learning on the job. I think everyone expected some of that but there is absolutely no excuse for Joe Lieberman getting a chance to stick it to you.

He campaigned actively for your opponent John McCain. He even spoke at the other party’s convention. He couldn’t wait for you to lose. He was on the opposite end of almost every major issue you ran on. He really hates your party now since they pushed him out. You had the power to eliminate that guy and you didn’t. Now you don’t want to seem bipartisan so you are willing to do anything he wants to get to the official 60 votes on the health care bill. That means the public option, Medicaid buy in and any single payer system is dead. That’s funny because the insurance mandate is in there which means that not only will insurance companies keep getting paid, we will all have to buy it from them or face the consequences. That’s enough to make me want to join a tea party. I say this while for the third time in the last two years my employer searches for a cheaper insurance plan that won’t cripple the agency. That’s okay though. We still have our freedom to hire all new employees part time so we don’t have to give them any benefits. I would like to thank Senator Lieberman and the rest off my government for preserving that privilege.

President Obama needed to take the approach that guys used to do back in high school. Back in the day there was always someone who liked the same girl you did and everyone knew it. He didn’t have to be an enemy but you knew that even if you never got the chance to be her boyfriend it wasn’t going to be because of that clown. You should never get played that badly by your obvious opponent. That’s what happened here with President Obama and Joe Lieberman. The scariest part of all is that I am afraid that he will ignore the obvious and keep doing things the same way. If that happens then he really won’t make any real change happen because those people don’t care about change and bipartisanship. They want to win. Ask yourself what would have happened if Lieberman was supposed to be an ally of George W. Bush and his crew while they were in office and then worked to destroy a bill of theirs like this. I’ll tell you what would have happened. Senator Lieberman would have awakened to his champion horse’s head under his bed sheets and Johnny Fontane would have gotten the part in that movie just like The Godfather.
Posted by Clifton at 12/16/2009 09:48:00 PM

LOL!! you did not just pull Johnny Fontane out of the archives- I love it! and you're right. Obama better get some of that gangsta ancestral blood boiling and crack some heads.

Rohm Emanuel has been as clueless as he has been useless. They were too cute by a half on the public option and thought that they could pull a "Lucy" to the end. This was not about giving insurance companies mandated customers.

YoBit lets you to claim FREE CRYPTO-COINS from over 100 unique crypto-currencies, you complete a captcha once and claim as much as coins you want from the available offers.

After you make about 20-30 claims, you complete the captcha and continue claiming.

You can click CLAIM as many times as 50 times per one captcha.

The coins will held in your account, and you can exchange them to Bitcoins or Dollars.