It's Not Personal Stinky Birds. It's Just Destiny 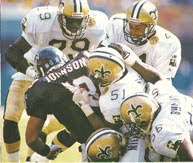 Before I start trash talking I want to say that last night I watched the defending champion Pittsburgh Steelers lose to the Cleveland Browns. As great as Brett Favre and Peyton Manning has been they each only have one championship ring. Dallas and Washington have two of the highest revenues in the NFL. In the last ten years they have a total of zero Superbowl appearances. Those things are hard to get to and even harder to win. Anything can happen.

No matter what happens from here on out I am happy with this season. We have never been through a 12 game winning streak so this all new and cool. I have been following the Saints since I was five years old and watching other teams build a solid foundation. They have a philosophy, they sign players that fit the plan and they stick to it. What makes this season even sweeter is the fact that Sean Payton and Mickey Loomis orchestrated it. They got us to our first NFC championship game and two rough years followed. The fact we are undefeated in their fourth season shows that they know what to do and I feel confident that we won’t go from contenders to chumps in one year. If anything the case could be made that we will be made that we will be much better next year with a full draft and some experience on the younger players that contribute now. I figure we have about three more years of Drew Brees at a high level and I expect to be a contender that entire time.

This week’s game is a party. We are headed to Atlanta to play the Falcons. I don’t know if people know this or not but the games against Atlanta are like a hood holiday. They bring busloads here and try to take over our stadium. We bring busloads there and do the same thing. We talk a lot of trash to one another but it’s all in good fun. This year is a little different because the ATL has never seen a few thousand undefeated, confident, people in black and gold that are full of themselves the way we are now. I wish I was going. We got Drew Brees going. We got Colston, Meachem, and Devery Henderson. Mike Bell, Pierre Thomas and Reggie will be there. We got Darren Sharper and Mike Mckenzie. We got Vilma and Sedrick ‘Big Nephew’ Ellis. We got Captain Charles bringing his van full of music. We got The Rebirth. We have a focused and humble team. We got it all!

Washington caught us when we were drained coming off a short week and an emotional win. Atlanta doesn’t have that luxury. Let’s get this home field advantage. It’s not personal Stinky Birds. It’s only destiny. You just happen to be standing in the middle of the road on our journey to Miami.
Posted by Clifton at 12/11/2009 09:35:00 PM

Oh Yeah!!!!! GREAT POST and I'm upset I missed out going this year.

Love Sedrick Ellis's nickname! What's the story behind it?

Me and my cousin call him Big Nephew because he looks just like one of his family. We keep wondering if one of his brothers ever made it to California and had kids we don't know about. That's why he's Big Nephew.