Sometimes You Have To Take A Beating 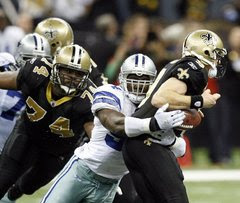 My friend Shawn is the most optimistic Saints fan in America while watching the game. All year when they were starting slow and looked like crap I would send him a ranting text message about how they need to step it up and play harder. He would always send me a reply telling me to calm down and they would make adjustments to get things straightened out. This is the only thing we ever argue about. Last night during Dallas’ touchdown drive at the beginning of the 3rd quarter he sent me a text message that simply said “This is difficult to watch”. When he can see what I am seeing that early in the second half I knew we were going to be 13-1 at the end.

Last night a talented Dallas Cowboys team was playing for their season, the playoffs, and their coach. The played a good game. The dominated out offensive line and defensive lines except for Will Smith and they deserved to win. The score was closer than the game actually looked. They whipped us from the beginning. The Saints finally got burned by a few things we have managed to cover for a long time. Our rookie cornerback got burned early. Our backup left tackle finally ran across a pass rusher that dominated him. We have been sleep walking through the early part of games for weeks and finally we couldn’t come up with the miracle play to change the tide. Drew Brees had his worse game of the season. We deserved to lose. If you want to look at the positive side we still could have won that game if a few plays go our way. As bad as I thought we played we only lost by seven points. I have confidence our coaching staff would attack them differently the second time around. We’ll see what happens if they make it in the playoffs and get through the first weekend.

Let’s look forward to Tampa and try to find some playoff intensity. Home field advantage is still ours to lose but we have to come out sharp and play a full game from start to finish. I kept telling everyone that one of these weeks we wouldn’t be able to come back from starting in a hole but not many people want to hear that when you are undefeated. We need to come out and destroy Tampa and get our focus back. Miami is in our sights but we have to start playing better going into the playoffs.
Posted by Clifton at 12/20/2009 09:16:00 AM

At least you didn't suffer the most embarrassing loss in the history of the franchise like a certain Pacific NW team did today...