Never Leave It Up To The Kicker 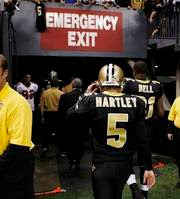 It took less than a week for Garrett Hartley to make me miss John Carney for short range field goals.

As the great Teena Marie once said, "I can feel this for sure. I've been here before." We still have a first round bye and a week to rest but I am getting a little worried. Anyone who really follows the team knows that every year Sean Payton and Drew Brees have at least two games like the one today. Let's hope this is the last one.....and can someone please do something to help Malcolm Jenkins because he is getting ripped to shreds. I just hope Carolina doesn't beat us up so bad that half the team isn't injured for the playoffs. That's an angry football team and we should have never let it come down to winning in their stadium on the last day. This season didn't feel like a regular Saints season for a long time but now it does. If you think losing this game and having to play all out against Carolina next week if the Vikings win is a good thing then you are crazy. Once we lost last week then we should have laid it all on the line this week against Tampa to rest up and get some of our injured players back. The bottom line is the New Orleans Saints choked. I love them but they choked.

In positive news, 'Bernadine's Oldest' fantasy football team is your 2009 champions of The Pitt Fantasy Football League. It won't be official until after tomorrow's game but he's out of players and I am up 7 points. Nothing will help you forget a choke job by the Saints like prize money.

Thanks, Mon. Needed that, really, and especially after reading the comments on the wwl site.
I too feel and can certainly understand the disappointment but not the rudeness, the fatalism directed toward the boyz by the fans.
I hate that much more than the Saints losing. It reminds me too much of that 1st week of the flood, ya'know? There was no music, no smell of food, no birds, no laughter, no hope and (I had not realized until today) no who'dats.
We don't need that shit.
GEAUX SAINTS!

Losing to Tampa Bay doesn't feel good, does it? On the other hand, you're 13-2 and didn't get ripped limb from limb in Green Bay in a replay of Sherman's March.

Cliff, your word verification is "foideou." Must be a NOLA thing.

LOL...I can't claim that one for New Orleans because I wouldn't know how to pronounce it if you paid me.

Seattle is tanking the season for a high draft pick.