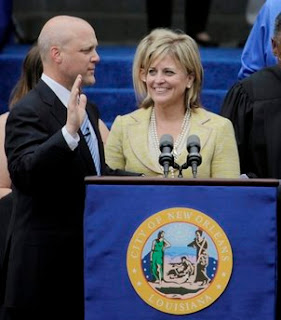 Today we have a new mayor in the city of New Orleans. I’m looking forward to see what happens. Since nothing has happened yet I think I will just wait and see how it all goes. It would be kind of crazy to say anything negative because I voted for Mitch Landrieu. I had to because he was the best choice. I would like to think that everyone would have done the same thing no matter who the best choice was. That’s probably not true but there is no need to worry about that now. New Orleans is a complicated place to live. It’s the kind of place where the evidence of racial and class divisions are visible and profound. They have been that way a really long time. They date back way before Ray Nagin was born which is why I never joined the bandwagon that treated him like the mastermind of the city’s downfall. It was falling long ago. Mayor Nagin just had the bad luck of being around when disaster struck and exposed everything in greater detail.

I didn’t bring that up to defend Ray Nagin. I brought that up to help everyone put in perspective what Mitch Landrieu can do. My expectations are realistic. The city is broke. No matter what kind of ideas we have nothing is going to happen if we can’t pay for them. I think a realistic expectation for the next few years would be for the mayor and city council to lay the groundwork for things to take off over time. We are going to need some patience because the young people who are out here spilling each other’s blood on the street are not going to change because you hire another police chief. If we don’t find any extra revenue we are headed for another four years of beautiful scale models of plans that will never get done. If the business community doesn’t get involved and invest in our worst neighborhoods then we will have the same opportunity gap we have now. If schools don’t improve more and parents don’t get involved we will be headed for a new round of kids that will start the process all over again. I’m not looking for Mitch Landrieu to turn the city into paradise. We’ll all have to do that together. I’m just looking for some stability, a morale boost and a turn in the right direction. A few smiles and good customer service from the people that work in City Hall when you go there would be nice too. Mayor Landrieu doesn’t have to be a hero. He just needs to act like a leader and we will be alright.
Posted by Clifton at 5/03/2010 08:11:00 PM

Good luck to him. Being mayor of any big city, never mind one with New Orleans' special issues, is pretty much an impossible job. From what I've read about New Orleans, you hit the nail on the head with your point about the city's businesses investing in poor neighborhoods.

Cliff, do you whether New Orleans has much going on in terms of microcredit? Microcredit has been pretty much a uniform good wherever it's been used.