Friday Night And The Sweet Smell Of Petroleum 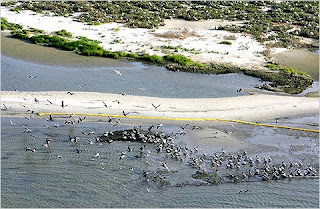 Once again Southeast Louisiana and the Gulf Coast are staring a disaster in the face and this time nature doesn’t have anything to do with it. You already know the story so I won’t get into any of the details. I really don’t know enough about drilling for oil to keep from saying something ignorant. All I can see right now is a threat to my summertime crabbing trips down in St. Bernard and Plaquemines Parish. If too much oil makes it inland I won’t be surprised if they ban folks from doing any recreational fishing. If that happens I will one pissed off human being because those activities are a big part of living down here to me. Being concerned about a crabbing trip may sound trivial but if I can’t fish then the commercial fishermen won’t be fishing either and that’s bad. It’s also bad if all the birds and wildlife can’t survive. It’s going to be made worse by our governor who won’t ask the government for anything because he’s too busy kissing up to his party. Right now the faith of our coastal well being is in the hands of BP and I don’t think they know what they are doing. I hope they figure it out because I don’t to have to boil water before I take a bath or get sick from the fumes. All we can do is sit back and hope for the best.

Sometimes I feel like I am being too simple in how I look at a situation but in this case I can’t help myself. We live in a country where soldiers can operate droid planes from America and conduct strikes behind enemy lines in Afghanistan. It’s also a time of such great technology that I can go to Google Earth, type in my parents address in Memphis, Tennessee and get a picture so clear that I can almost see them eating dinner. I refuse to accept the fact that there was no way to stop this oil from flowing or at least know how much oil was coming out of there when the leak started so the response could have been appropriate from day one. I do not understand how something like this could potentially go on for weeks. I bet you there is a way to keep this from happening but no one made sure the oil rigs in the Gulf had it because we don’t have any politicians with the balls to stand up to corporate America. Oh yeah, all you anti government folks need not worry about your tax dollars paying for this one. BP’s responsible so when you are paying 7.00 a gallon for gas if this spill gets further out of hand, you can feel good knowing you have your freedom and the government didn't take charge.

This last thought may also be simple but if BP is drilling that close to where we live how come we don’t have more money than we do? BP’s home office is in the United Kingdom and they have a giant corporate building in Houston. They earned 246 billion dollars in 2009 and I know some of that came from rigs that are so close to my house that I can smell the fumes from the oil leak. Despite that our state has cut health care and education repeatedly over the last few years and I live in a city that can’t even open a damn hospital. These are the kinds of things that make you want to join the wing of the Tea Party that likes black people.
Posted by Clifton at 4/30/2010 08:15:00 PM

Good luck finding that wing! Maybe you should form a Black Tea Party!

Truth is, none of us knows enough about offshore drilling, except for the people who do it. And if you're not regulating it, it gives you more deniability in the event that something like this happens (aka, our state and federal governments). I didn't know that any safety precautions these corporations take regarding leaks and spills are voluntary, for instance. We've been kept in the dark about this in part because our state is content with the crumbs the corporations give to us in exchange for making our wetlands holey dead zones, and also in part because we as a country are so damn dependent on oil.

In some ways, I feel even more helpless about this than I do about the failing levees.

I just finished reading an article in which an expert pretty much said that oil spills are by definition out of control and that little can be done about them. BP and the Coast Guard tried burning and that didn't work. The Gulf wave action is too powerful for the booms. And it's probably going to take months to cap.

If safety precautions are voluntary, they shouldn't be. In fact, the oil companies should have to prove safety before they're allowed to drill. What do you bet that they'd resist that tooth and nail?