McNabb Pays The Price For Being A Good Dude 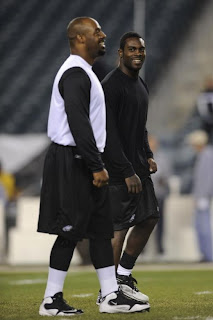 I want to talk about Donavan McNabb being traded to the Washington Redskins. I know it’s not football season but there is a teachable moment in this (I am falling in love with that term.) I am a fan of Donovan McNabb and as long as their winning didn’t affect the Saints I pulled for the Eagles because of him. I guess I have to change that rule to the Redskins now. No matter if it was the fans booing him on draft day or this popular radio host saying the media gave him props because he was black, he’s managed to handle himself in a respectable way. What I am about to say only applies because I think Donovan got traded because of Michael Vick. The media said it was for the other quarterback Kevin Kolb but there is no way Michael Vick is going to sit behind Kevin Kolb for 16 games. The Eagles just need to say that so Donovan doesn’t feel like the fool he was for lobbying the Eagles to sign Vick in the first place. Even if they really want Kolb to start they weren’t going to pay Vick all that money to be third string again. I knew this was going to happen because good brothers get played like this sometimes when they try to help people. You just have to be prepared for it when you make that decision. There was no personal upside to Donovan McNabb helping get Vick back in the league. You didn't see any other established starting quarterbacks endorsing their team signing that human highlight reel did you? He put his reputation out there to help him get a second chance and now he is the odd man out.

The last time he did this kind of thing was for Terrell Owens who acted like a complete asshole in Philly until he went to Dallas so he could suck up to Tony Romo who eventually got him ran out of town to Buffalo. I’m not a T.O. hater but I can't get over the way he handled that situation in Philly and treated McNabb the way he did. He only made it worst by crying on television behind Tony Romo’s overrated self. Now Donovan takes his character and integrity to Washington. Knowing the kind of guy he is if T.O. wanted to come to Washington he would be the first person lobbying on his behalf. I am upset because I thought he was going to the AFC where I could pull for him to get to the Superbowl. Now all I can do is hope Washington makes the playoffs and gets blown out by the Saints on our way to back to back titles. Even if he doesn’t win a title I know he will handle himself in the right way and for that he has no reason to feel like an underachiever.
Posted by Clifton at 4/06/2010 12:10:00 AM