When Oversight Is Necessary 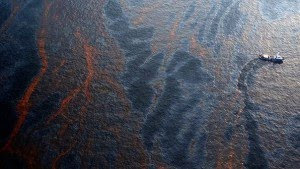 I have been reading and listening to opinions about the oil spill and I see what’s wrong with the country right now in my opinion. No one can have a reasonable conversation about anything. When something like this happens people want to make political statements for their side. There shouldn’t really be a side when something like this happens because everyone failed. I know we need to drill for oil since there’s no alternative at the moment. I accept that fact but the part that concerns me is that no one made sure there was any system in place in case an accident happened. After all, anything man made can go wrong so there was always a chance an oil rig could blow up. Some people think regulation on companies goes against our system of free enterprise. You can be for free enterprise and look out for the general public at the same time. You shouldn’t have to choose between the two. A business should make all the money they can make as long as they don’t destroy the lives of other people to do it.

If I and a friend decided to quit our jobs and open a strawberry farm in my back yard we should have the right to do that. If our crops became successful and we were making money to become the kings of produce, I don’t believe we should have to pay extra taxes or fees as a punishment for our success. I don’t believe the government should do that to people or companies who are trying to be successful. What the government should be doing is making sure that we are not spraying our crops with some pesticide that causes cancer or spraying them with a chemical that makes our product look better only to find out after years pass that it’s bad for people. That’s what you need government for because the average person can’t monitor these types of things for themselves. We can debate about the need for government in other things but this kind of oversight should be something we all agree on. Disasters don’t give a damn about political views.

With the way the system works now the government could ask us about the pesticides we’ve been spraying on our strawberries but if we had the right lobbyist and made the proper campaign contributions no one would make us change it until everyone was sick. It would be too late then because the damage is already done and that’s the same situation in the Gulf of Mexico right now. I don’t think anyone was trying to stop BP from making money. I would bet that most people didn’t know what companies were involved in what rigs out there. They could have pumped oil out of that site for the next ten years and I wouldn’t have thought about it one time. Now I have no choice but to worry about it because it’s clear they don’t really know how to stop this thing from leaking. In this instance business and government both failed. The business didn’t have a real plan and the government didn’t make sure they had one.
Posted by Clifton at 5/23/2010 11:47:00 PM

As you know better than most, it's an unfortunate trait of this country that people don't get concerned until a catastrophe happens. The spill is a function of over 30 years of deregulation and staffing Interior Dept. agencies with career employees friendly to the oil industry.

Re the commission, I don't scoff at forming it now instead of later -- you want to do something like that while the issue is hot. My fear is that the commission will make a limited inquiry into the specifics of this particular spill rather than expose the overall climate that created it. While they're at it, I'd like them to look into the specifics of the Cheney Energy Task Force.

It's a rare event if I ever agree with David Vitter about anything, and even rarer that I would disagree with K., but I think that 100% of the governmental brain-power at this moment should be given to stopping the leak. The federal government needs to bring in other companies, pay other companies if that's what it takes, to figure out how to stop it, rather than forming commissions. This topic won't cool off any time soon. sp

There's nothing political about this. Everything is more criminal out there than anything else, and that ought to be in everybody's best interests regardless of how you think politically. All people are in the same oil-soaked boat in this disaster, and if BP really cared about more than just their own profits, they'd have welcomed the help with open arms.

They're no better than a mob operation at this point. And I agree wholeheartedly: political posturing needs to be put aside and the Gulf needs to be saved. Don't care who saves it, so long as they do it and then get the hell out of the way.

If a guy like David Vitter opposes this commission, there must be something to it!

My benchmark is Katrina: The political moment for a massive federally funded rebuilding of NOLA has passed and is not coming back. The commission's report is due in six months. People will be that much more complacent then; any hope of systemic change will diminish every day. In politics, you must strike while the iron is hottest.

Honestly, I don't think that BP or the federal government or Hugo Chavez or Jesus Christ himself could cap this well. I mean, they're down to tossing golf balls into a mile-deep gash in the ocean floor. It's time for some honesty -- that the most likely technique to stop the spill is the relief wells, and they're months away.

I co-sign with Leigh C.