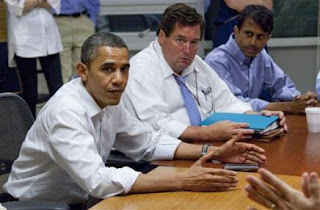 The best thing about being a blogger with your own site is that you can always ignore a topic if you want to. For the next six months I could talk about anything and everything I feel like and it’s all good. That’s what I am about to do with this oil spill. This is my last post about the oil spill. It’s been 38 days since the spill started and it doesn’t appear like it’s going to stop anytime soon. BP says it needs 48 hours to see if the ‘Top Kill’ plan worked in stopping the oil. That gives everyone 48 hours to sit around and wait for them to say it didn’t stop it. Since we have been getting so much mixed information I am not sure I will believe them if they say it is stopped. Regardless of that outcome I am going to go ahead and get it all off my chest right now and worry about other stuff.


Why does it always seem like every negative result from government incompetence ends up affecting where I live? I have been the victim of government failures on every level. From Katrina, to the oil spill, to my city’s school system, there’s always a price to be paid for incompetence. I think some of the Tea Party folks are crazy but I do understand how some of them got that way.

I still don't understand how Louisiana is taking this much risk to their entire way of live for companies to drill oil and yet we have all these cuts to education and other services. I think we are getting played.

People need to stop watching the spill cam. It’s only going to drive people crazy if the leak keeps going.

Billy Nungesser deserves a nice vacation to somewhere quiet and relaxing after this thing is under control.

If you are trying to pick a political party that is more or less responsible for the breakdowns that lead to this explosion you are wasting your time. They all serve the same master and he’s made of green paper. We need to just let that go because selling out to Corporate America is the only bi-partisan thing in government at the moment.

I know it’s not President Obama’s fault the rig exploded but he is the leader of the country and he’s supposed to be the guy that is different than the last guy. He should have been more on top of this spill from the beginning. He should have never let it get to the point where people were calling him out on not being in control. Even if you think that maybe he didn’t come too soon because since he’s been in office leadership in our state has been turning their noses up to any assistance he’s offered or that all of these red states in the south have been complaining about the federal government being involved in their business so he was giving them what they asked for, or that he and his advisors probably thought to themselves that it didn’t really matter if he came to the Gulf of Mexico and plugged the leak with his finger because these people weren’t going to vote for him anyway it still doesn’t excuse how he handled the situation.

Now that all hands are on deck we shall see what happens. Even if the top kill works and there are no more gallons of oil added to the mess I don’t know how the coast recovers anytime soon if it recovers at all. Maybe they will bring in the tankers that can suck up the oil. Everyone keeps talking about them so maybe they are on the way. In the meantime I am going to hunt for some new crabbing spots a little further north while the water is still clear.
Posted by Clifton at 5/28/2010 09:52:00 PM

Cliff, I'm just stopping in to say I really like your blog and am glad you are here. And the picture you posted is really the best picture of the day. I hope Billy Nunegesser spoke his mind today. You're right about his deserving a vacation. If everybody tended to their space and their people the way he seems to, things might get a little bit better. I'm pretty sure he's not grandstanding.

I salute you, Cliff. You're one of the people I appreciate.

I agree Cliff and I hope they do something about this problem soon. It's affecting everyone. Went to Deanies in Bucktown and they had no oysters...WTH?