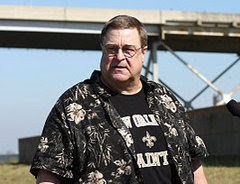 There was as scene last night on Treme where Creighton Bernette played by John Goodman receives a visit from his New York publicist. If I understand the storyline correctly he started writing a novel about the 1927 flood that hasn’t been published yet. He thought she was coming to get Random House’s money from his advance but due to his rants on YouTube about Katrina they want him to change his book. It’s a great opportunity and a second chance to get his writing career going but he’s got this apprehensive look on his face because deep down he doesn’t want to feel good about anything connected to the storm and the suffering. He’s been doing those videos out of anger and passion for what’s going on in the city and now he’s about to reap the rewards from the same situation.

I can relate to that. Since Katrina I have had a lot of positive things that have happened to me personally. I know I had to do something to earn everything. The way I look at is that there are so many folks who don’t mind using their experience for profit. They don’t mind telling everyone about what they went through if they can benefit. That’s never been me so I hope no one’s ever given me anything because of that. People are wired differently and when something has affected you with the magnitude that Katrina did, you might force yourself to make anything positive that develops from it tainted or questionable. That means even if you get emails every day saying how good you are you will talk yourself out of believing it. This is especially true if before the storm you didn’t feel like anyone was that into you.

Now, it’s entirely possible that you were always as worthy of the things bestowed upon you and the storm was a life changing event that served as a catalyst for exposing some of your talent to others. That sounds like a perfect explanation for everything but depression and post traumatic stress is a hell of a tag team and no one has time to think that rationally when they are attacking your brain. I felt bad for Creighton last night because even if he finishes the book and it’s a bestseller or he ends up with his own television spot because of his YouTube videos he’s not going to really get the full pleasure of his success. That’s something a lot of us lost in the storm that we can’t report to FEMA.
Posted by Clifton at 5/17/2010 08:20:00 PM

Cliff, I like your take on this scene. I was thinking along the same lines, feeling guilty if something good comes from something bad. Thanks for sharing your personal experience with this.

I'd like to echo BrenyB -- excellent analysis. I don't think anyone should exploit misery under any circumstances, but there is value in taking a story to the wider world.

The people of New Orleans went through seven kinds of hell and then some. You can judge yourselves, but I certainly don't have the right to.

IMHO, each new episode of Treme has been better than the one before it. I thought Wendell Pierce was good in The Wire, but he's outdoing himself here.

I've been enjoying Treme, in spite of its limitations. I thought that Creighton Bernette was just being angry, bitter, stubborn and writer-blocked in that scene. The conditions weren't exactly conducive to creative thinking beyond a person's comfort zone. Somebody who flew in from New York doesn't get what happened in Katrina, or why the New Orleans people weren't at their best. thanks, sp

I'm going to put it like my grandmother did when she REALLY liked what someone said.
"My, oh my...how you talk."