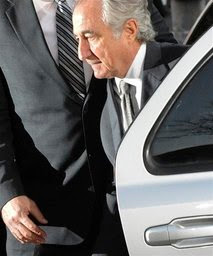 I see Bernard Madoff finally went to jail. I am glad the authorities were able to pull him from his million dollar apartment. I was disappointed with what I saw. First of all he had on a suit. He should have had on an orange jump suit and shackles. I have seen people look more criminal than that going into traffic court for unpaid tickets. Secondly, there should have been a moment where the people whose lives he ruined were allowed to cuss him out or hit him with a broomstick. I know he’s supposed to get a 150 year sentence but the man is 70 years old. He’s already had the privilege of living his prime years as a billionaire. I think he got a pretty sweet deal for such an evil and heartless crime. I pose a question to everyone that reads this. Since I will be 35 soon let’s use that age. If someone told you about an idea that could allow you to live the next 35 years as a billionaire and the only punishment was you might have to go to jail in your 70’s would you do it?

I don’t have the evil in me to steal money from all those innocent people like the financial mafia guys did but if I could come up with some computer code or something like those cats in Office Space that takes the fraction of a penny off of the accounting numbers I think I would go for it. I could get a lot done in 35 years as a billionaire. I could take care of all my family and friends. I could send my kids to one of those schools that are so good they teach Quantum Physics in the second grade. I would let my lady get some of those ugly designer clothes by some new wave fashion guru that cost so much people force themselves to think that junk looks good. I would take monthly trips to to watch professional wrestling just because I can. Since entertainers and athletes like hanging out with rich people I would befriend them and make them take all the money they are going to squander away eventually and donate it to my foundation. Then I would take that funding and put a new school and health clinic in every poor neighborhood in the city. I would buy up blocks of blighted buildings and replace them with playgrounds, learning centers, and housing for homeless people. Every new project would be named after one of my grandparents or one of my aunties. By the time they catch me in the year 2044, I would be so popular that no one would believe that I stole the money anyway. I think I could accept my sentence at 70 years old after doing all of this. I figure after the daily routine of steaks, 12 year old scotch, and Cuban cigars I wouldn’t be in my cell long before I ended up in the infirmary. This scenario works for me.

Of course I could never really do anything this crazy. I don’t have access to any financial institution’s accounting system. I took two programming courses and hated them both so whatever I did would be so bad that they would discover my hustle the first week. Knowing my luck they wouldn’t send me to the country club jail with the rest of the rich white collar criminals. I would end up in Angola with a young skinhead cellmate whose been doing 1000 pushups a day, watching Eyes on the Prize, President Obama’s victory speech and listening to Public Enemy on whatever music will be played on 35 years from now in anticipation of my arrival. Plus I have the wrong friends and background to make it work. In order to make scams work you have to be really smart and hang around other smart and rich people. Americans never question smart, rich people and will give up their money willingly to them with no questions asked until they find out that money isn’t there anymore.