An Open Letter to Number Seven 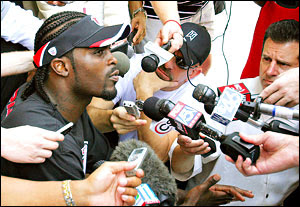 Before we get to what the subject of this letter is let me start by saying that since you have been a professional player I have never once wanted you to win a game. I don't like you as a player or the team you play for. See, I am a Saints fan and the thought of you with the ball in your hands scares me. I can just see you running right pass Fred Thomas. That's why you need to hear what I am about to say from a person who is not a fan. I am sure you have male groupies and Falcon fans who are probably kissing your ass all day and making you think everything is ok. Things are not ok Mike. I am sure you know the history of black coaches and quarterbacks in the NFL. For years billionaire owners and there millionaire coaches have always been reluctant to let brothers play quarterback on the professional level. The reason is that since football was invented the quarterback has been the premier position in the sport. Quarterbacks reflect leadership. They are the face of the franchise. There was actually a time when people thought a black man lacked the intelligence to play quarterback. Some people probably still think that way. Your status in the league from a marketing standpoint is the evolution. People actually pay just to see you play quarterback. Except for here in New Orleans there are #7 jerseys everywhere. The Falcons gave you, a brother, 100 million dollars to represent their team. I hate the Falcons but that’s a really big deal. Cats like James Harris, Doug Williams, Warren Moon, Vince Evans, and Randall Cunningham paved the way for you to have the kind of exposure you have. That's why for the benefit and legacy of every black quarterback, your ignorant ass cannot have anything to do with dog fighting.
Mike, the media is waiting to take your ass down. ESPN ran that story on Outside the Lines and they have been talking about it all day on the radio. I know young brothers sometimes don't expand their way of thinking beyond the five block radius of the hood they grew up in. I'm from the South too so I know that there are cats out here that treat those damn pit bulls better than they treat their own children. I understand where you got it from but it doesn't matter Mike. You are no longer a regular black dude from Newport News, Virginia. You are getting paid 100 million dollars to play quarterback in the NFL. You might want to keep it real and do all the stuff you would be doing had you not made it to the NFL but you can't. Damn the pit bulls! Get a cocker spaniel and sit your ass down. A man in your position cannot do three things and keep your public image. You can't mess with kids. You can't do anything to violate a white woman (ask Kobe) and you can't get PETA and the animal rights groups on your ass. If you think I am lying about the animal rights stuff go ask P. Diddy. Have you seen him on TV with a fur on lately?
I am going to end this letter Mike with the big picture. The mainstream media is looking for one of you young black role models to take down in order to reverse the influence you have on suburban kids. They tried it with Kobe but he was innocent. The tried it with Allen Iverson but that turned out to be some crazy family business. None of the other targets were big enough. You would be the perfect person, with the perfect profile and the perfect crime to outrage the mainstream. Do us all a favor and come out with a press conference apologizing. You might even want to pay everyone involved with those dogs to take the fall like Puffy and Ray Lewis did. If you don't, I am afraid that nobody will be foolish enough to come to your defense except Jesse Jackson and I am not sure if that will help or hurt you

Get it together Mike. You owe it to all the brothers who paved the way for you to be in that spot. Plus, I don't want any excuses when he head to the Georgia Dome next season and release Reggie Bush on that ass!

Now ain't that the truth? Why folk gotta get big-time and still act so low? Y'all know the saying.. You can take the n*gga out the hood but you can't take the hood out tha n*gga! LOL