Just To Get That Gold 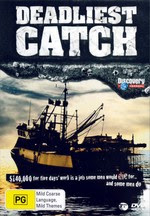 I know a place where the faces are so cold.
I drive all night just to get that gold.

I hate reality TV shows that are put together (Real World, Survivor) or have some kind of contest, except for Dancing With The stars (Laila, holla at me!). Shows like that are not real because they put those people together knowing something stupid will happen. What I am into is shows that give you an insight on things that go on in everyday life. Discovery Channel is the greatest network on television for this reason alone. The best show on the network and on television period is The Deadliest Catch. This show goes on board of these crabbing boats in the while they fish for King Crab. The reason I love this show is simple, these guys have the biggest balls in all of . They go through ice, storms, big waves crashing into the boat and they just keep going. I don't think I would get out there in those conditions and risk my life without a guarantee of catching anything. People actually die while the show is being filmed. Not only that, these guys stay up two and three days straight with little or no breaks pulling crab pots. They are working their ass off on nothing but quick snacks and gallons of coffee. Through all of that you hardly hear anyone really complaining. It's the kind of thing that you watch and think about last week when you cursed life itself after having to stay thirty minutes late at work. It makes you realize just how much of a freaking slacker you are. If you don’t watch it for the fisherman, watch it for the cameramen who have to be the most dedicated professionals to stand out there on the deck of that boat and catch it all on film.