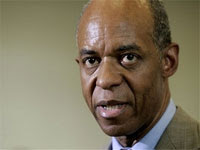 I would like to thank everyone who voted for William Jefferson instead of Karen Carter for Congress. At a time when we need as many voices as possible to get the money we deserve to rebuild the city, we now have an elected official that will spend all his time trying to stay out of federal penitentiary. Even if he is found innocent he will be tied up for the next few years. That's not the only issue. No one in is going to want to have anything to do with this cat. We basically have a wasted position filled by a man that will never step down. This is one post Katrina catastrophe the citizens will have to own themselves.

as for the guy who was arrested..
I Blame Eddie Jordan!, (JK).

yeah we actually thought he only was arrested for tearing the gate down. We live in a world of Murderers and Criminals that know what they are doing and know who they want to target. this is why We as New Orleans Blacks who live amongst them Aren't Scared. Mainly We aren't aware.