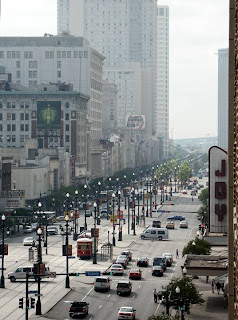 This week Greg Rigamer (I am still not sure where he lives.) put the population of New Orleans at 262,000. Mayor Nagin is disputing this number and I agree with him. The figure Rigamer came up with is based on official data like utility hookups. I am sure this is a way to get a count that can be proven but it does really count everybody. That is especially true in a situation like this considering the way New Orleans residents do things. So, being the concerned citizen that I am, I will now give an educated estimate of the real population based on actually being here everyday and seeing what’s going on. The 262,000 that Mr. Rigamer will be used as our base number in the equation.

262,000 Residents based on the official population estimate.
+
5000 People who are living with someone else because they got kicked out of Texas.
+
2000 Crooked contractors staying in hotels; because when you steal money it’s not good to have an official address.
+
500 People staying in trailers that is supposed to be empty. They usually have bootleg electricity so Mr. Rigamer missed all of them.
+
5000 People who are here everyday but swear up and down they live in Atlanta, Memphis, Dallas or Houston now and are not coming back.
+
20,000 Workers from Latin America. I don’t think anyone really knows where they all live but they are here.
+
5000 Family members of the workers from Latin America.
+
500 Thieves, pimps, prostitutes, scam artists, drug dealers, fugitives, hustlers, and anyone else that needs to hide in a city where everyone is dealing with so much that they can’t pay attention to people like them. If you believe the media this number should be 200,000.


If we take our base number and add all the sections of population they missed, we come to an even 300,000. Mayor Nagin has my permission to use this in the media to make his case if it means more resources.
Posted by Clifton at 6/29/2007 08:41:00 AM

yeah and we know what the do with those "official numbers". they use them to determine how much money is budgeted to "help". and we know how they do that. the budget x amount of $$ per person, then cut it in half. so we know how much money will be sent to help: NOT enough. and thanks for the comment about my mom. her and my chap went to eat indian food. told me i couldn't go. (my daughter) my stepdad is at my aunt's i think. maybe he can stay til they leave. did i mention he cussed my daughter out? i know he's out of it but it hurt my baby's feelings any way.