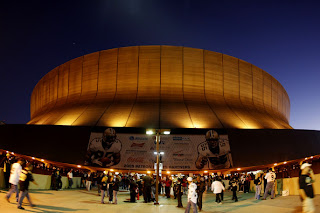 Everyone is all excited about this game tonight. Some fans are acting like it’s the Super Bowl already. I am excited about it but my reasons are long term. Tonight is the night we get a chance to see if our team has what it takes to really go all the way.

New England is the measuring stick for every franchise in the NFL. The only teams close to running a championship operation they do is the Colts and the Steelers. Two years ago they had an undefeated regular season. They lost in the championship game to the Giants who they also played the last game of the season to complete the 16-0 season. The thing I remember about watching that game was that even though the Giants lost the game during the season, they gained so much confidence from the fact that they were able to match New England’s intensity that it carried them through three road playoff victories and defeating the undefeated Patriots in the Super Bowl. The Patriots do everything aggressively. They play with championship intensity and leave no doubt that they are trying to beat the crap out of you. If you want to beat them you have to step up and earn it. They don’t care what the Saints record is. They want to destroy us and they are supposed to. That's what championship teams do.

Tonight’s game is all about whether or not our home team can step up and match their intensity. A victory tonight means that they were able to do that because it’s the only way New England loses this late in the season. A tough loss in a close game would be a stomach punch but just like the Giants it won’t kill us as long as we give them our total effort. I’m going to go ahead and predict this game and call the score: Saints 35 Patriots 27. I think the home crowd makes the difference eventually although some parts of the game may get kind of rough. I want to win this game really bad because I want to be just like the team we are playing.
Posted by Clifton at 11/30/2009 03:47:00 PM

Damn Cliff! You gave the Patriots too much credit - and the Saints not enough. Just sayin...

It's about 5 or so minutes left and I'm callin' this one right now (especially since I don't see Cheatin' Bill pullin 3 touchdowns out of that head he keeps scratchin'!).

Congrats, Man! I hope, finally they measure up. :-)

Cliff, whatever you did, it was truly special. I'm glad about this win especially for you and for everyone in our city.