All It Takes Is One Crazy Person 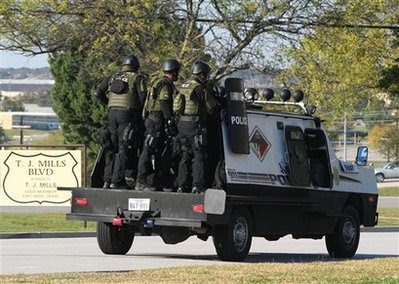 I don’t discussing stuff like what happened at Fort Hood yesterday because sometimes all the coverage takes away from the real story which is that innocent people lost their lives. There were two things I took away from watching the news yesterday. The first thing is that the media is too quick to report facts before they are sure. It started out as multiple gunmen. Then, it was only one shooter who was killed during the incident. It turns out that this guy was still alive in stable condition the whole time. Sometimes we need to calm down and wait until we get the official word. The second thing I took away from what happen is that you never know when one person is going to snap. We are in the era of people saying anything and everything to get the public to their side of a debate. I’m not just talking about Republicans and talk radio either.

It seems to be the norm to say something sensational to make your point. Just this week someone predicted there would be a race riot in New Orleans soon. Rational people who feel stable watch this stuff and pass it off as either foolishness or political posturing. They are right about that but not everyone is as stable as you to hear words of anger and fear all day and not do something crazy. I don’t know what goes on with a soldier during times of war. You can talk to people that have been there but I think it’s something to you have to live for yourself to fully understand. I don’t know who or what are made Major Hasan do what he did yesterday. I do know however that it didn’t take a few hundred Al Qaeda commandos to shut down the largest military base in the country. All it took was one paranoid American with the wrong mindset to do it. The next time you listen to a discussion on an hear about how the government wants to take our freedom and send us to Nazi camps you think about those people that got shot yesterday and remember that someone is taking this stuff literally and you don’t know what they are capable of.