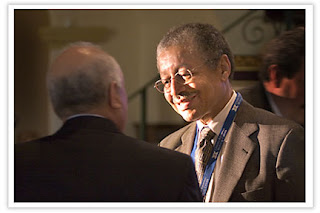 There is a news story about an interview with Ed Blakely. In the interview he had a lot of negative things to say about the city. He basically said the natives were dumb and lazy, black people didn’t like taking orders from white people and white people wanted to seize political power. He says that we paid him all that money because we didn’t want to fix our own city and was just hoping someone like him would do it for us. He also said that if the next mayor wasn’t a clever person there would be a race riot in the city. There were enough harsh words to go around for everyone. He’s probably sitting somewhere spending one of those New Orleans paychecks right now.

When I first read it I was mad at Mr. Blakely and I wanted to call him all kinds of names. I am sure he deserves a few of those names but I thought about it for a minute and realized that he didn’t really say anything that I don’t hear from different people living right here in the city. I even wrote myself last week how we keep wasting money because of our incompetence. The truth of the matter is that we live in a city where black leadership doesn’t have a good image because of the current state of the city. White leadership doesn’t either because too many black people think everything they do is personal and they don’t do anything to prove that theory wrong. Most of us spend our day fussing about some aspect of city government or some demographic that bothers us. Outside of pulling for the Saints, you would be hard pressed to find anything that people in this city rally together for. I can’t be too mad at Ed Blakely for saying what he did. His biggest sin was breaking the local code of putting our personal business in the street. We prefer to keep our problems secret so we don’t scare off the tourists. There are a lot of people that feel like Ed Blakely does but they have to live here and make money so they channel those feelings into being concerned about the conditions of the natives that can’t help themselves.

The men and women running for mayor should save a copy of Mr. Blakely’s interview and watch it several times a day because whether we like it or not it’s how people view the city. We have no one to blame for that but ourselves and we are the only ones that are going to change that. I say we all agree that the first candidate who spends all of their time trying to tell us what we suck at instead of how we can be better they should be forced to shut their campaign down immediately. I’m tired of paying people all this money for things we can do for ourselves and having them look down on us. When is all that local pride we say we have going to kick in for real progress.
Posted by Clifton at 11/03/2009 07:40:00 AM

Well said...it's hard to be one of those folks that comes from somewhere else with good intentions. The help is often unwanted, even if it is genuine.....

From my memory, his time in New Orleans was a complete waste. He took a few bike rides through some of our neighborhoods, he had his infamous "cranes in the sky" quote and my personal favorite: his inability to give a direct answer to a question. So, no, I'm far from angry at him; I'm totally apathetic toward him. I'm puzzled as to why anyone would care what he had to say about anything.

I feel somewhat similar. Although I think a lot of his observations were right, that's not what we paid him for. HE failed, and he should have owned up to it.

The people of this city are united on the issue of flood protection.

Sandy,
I would never try to argue with you about anything dealing with flood protection but that unity is by default. If some of these people could figure out how to protect their area as a priority over others they would.

Clifton,
And to further your point about flood protection, the Ninth Ward would be dead last on the list for protection. There's no shortage of New Orleanians who couldn't care less about the Ninth Ward on a whole host of issues.

Clifton,
I think I should mention I live in Holy Cross.