The Bandwagon Is Getting Crowded 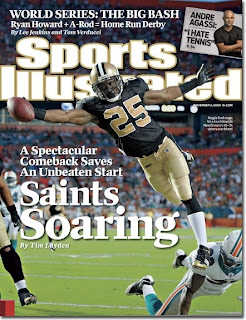 There is nothing that brings me more pleasure in sports than when the Saints beat Atlanta. There's also not another team that reminds me of how rough it's been over the last 30 + years of following this team. These Saints/Falcons games are personal. I like being undefeated but this media attention after only 6 games is starting to bother me a little. It would be one thing if our team was used to it but they are not. I like flying under the radar and keeping the routine close to the same. Peyton Manning and the Colts figure out how to do this every year in spite of all the commercials he does. The national media acts like the Saints are the best team in the league. Most of these folks had the team going 8-8 but now they can't stop raving about us. I don't like that because it takes away our edge. I don't want to be kissed up to until we are in the Superbowl. Then and only then will all of that admiration be legitimate.

If you just started following the team since Katrina you won't understand what I am saying. Just remember I told you that the first lost or rough stretch of games that all teams have we are going to be pushed aside like a flash in the pan. They all really want Brett Favre or Tony Romo to play in the Superbowl anyway. They don't want New Orleans to win and kill their ratings and promotion. If you want to know why I am talking so negative about the team being popular instead of holding parades in their honor this early in the season, it's because I can sense a little changing of attitudes on the team. They look a little too cheerful to me to only be 6-0. They could end up 6-10 and all this was just a brief moment of happiness for nothing. They need to stay hungry and come out like the same team no one thought had a chance. They are playing the pre-season favorites who will be fighting for a chance to win the division tonight because if we win it will be hard to come back from three games down with our schedule. They will give it all they have and we need to match that. I hope the first half of the Miami game was a wake up call. You are not going to come out flat like that and come back against NFL teams that often.

Hell, they have to beat Atlanta. That's imperative, regardless of whether or no they're undefeated.

Troy Aikman said yesterday that he regarded the Saints as the class of the NFC.

"They could end up 6-10 and all this was just a brief moment of happiness for nothing."

Dang Cliff! Yeah they could, but they're 7-0 right now! "A brief moment of happiness" is never for nothing man!