8-0 And A Game Ball For Congressmen Cao 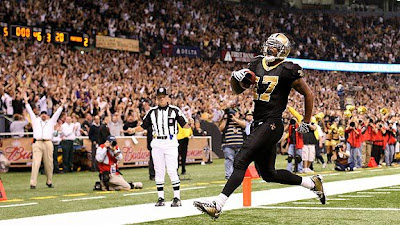 When you add it all up it's been a good weekend. I purposely didn't say anything about the Panthers game out of fear of angering Steve Smith and feeling his wrath. It's been a long time since Saints fans didn't go home with visions of #89 ripping their hearts out. We finally beat the Panthers at home and we are not 8-0. I can do without the slow starts but it seems like every week another player is stepping up. This week is was Robert Meachem who made a few big catches and Anthony Hardgrove on defense. They had a good games but neither one of them is my MVP.

is congressman Joseph Cao who has the distinction of being the one politician that actually voted yes for a health care plan that would benefit the majority of his district. The reality is that he's representing a district that was not created for a man like him to serve. The majority of the people in the district didn't know him before he was elected and it's likely that he won't win re-election no matter what he does. He was a lame duck the day he was sworn in and has nothing to lose. Since he knows this too he could have voted against the bill and fell in line with the rest of his party but instead he voted based on the needs and wishes of the people in his district. That's the reason why Congressman Cao gets the game ball for this week. I think the people he voted yes for need to be on alert this week because the right wing media machine is going to let him have it. Just like the Saints got lucky and found Pierre Thomas, Marques Colston, and Mike Bell maybe our district got lucky and found Joseph Cao.
Posted by Clifton at 11/08/2009 07:13:00 PM

I agree Congressman Cao should be commended for his vote. What a great thing to be singled out for. sp, n.o.

Who'dat? Who'dat?
13-0 Baby!
I don't know how this woiks to comment back onto an older post, but I heard today on WWL that Cao is going to offer his Weekly Speech Minute to Saints Fans to send in little Speeches.
Each congressperson has this time each week for "their thing", and Coa's Thing seems to be Who'dats!
Have you heard this?
That Cao is just a surprise a minute I'm tollin'ya.
Who'dat!
Will you put da'Cliff Notes onto it and do a Post?
And try to email me if you do, but 'course we try to stay tuned to da'Crib.
Thanks youz