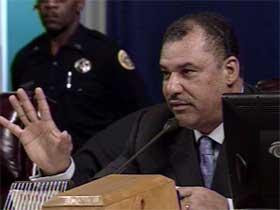 If someone would have asked me who was the one local politician I would have never thought to get indicted it would have been Oliver Thomas. I’m truly shocked to hear that he is going to plead guilty to a corruption charge and resign from the city council. I like Councilman Thomas enough to even defend him if he wasn’t going to plead guilty. I guess it’s not a lie. This is really a sad day for the city. I don’t see anyone on the horizon who I think is deserving of being mayor more than him. However, you have to look at things on a larger scale. To put it in perspective you have to do three things. The first thing you have to do is ride around the city and look at the condition of the infrastructure. The second thing you have to do is pick up the classified section of the newspaper and look at the professional job section. It’s kind of thin. Third, you have to think about all the people from that can’t live here because there is not enough opportunity for advancement. After that you have to ask yourself how many people wanted to start a business here only to get frustrated and move to another city to make it work. How many companies wanted to open a branch or an office here but got tired of the political hassle and just said forget it and went to another area? How different would the tour, the classified section and the population be if everything here was fair and square? With that in mind I guess Councilman Thomas and any other person who puts us in negative light has to go. Nobody wants to come here and invest there money in a place full of shady dealings.

The question now is who else did Pampy rat on.