It's Nothing Serious....I'm Just Here to Blog 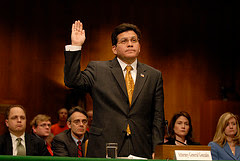 In order to get something you got to give something
In order to be something you got to go through something
No Pain No Gain by Betty Wright
Today is the start of a very strange week. The post Katrina world always lends itself to rollercoaster periods of being really up or really down. So it stands that today I don’t feel well while at the same time celebrating the birth of one of my grandmothers. Happy birthday Mildred. In two days I will be honoring the passing of my other grandmother because of Katrina and appearing on a national radio show the same day to talk about the anniversary. Last week, I spent most of the week really blank mentally. I guess I was able to focus long enough to write something that would get noticed by The Slate.Com. That’s usually how it goes for this Ninth Ward brother. I guess I just go up and down. This is my new normality. There is no need to dwell on either direction. I’m just here to blog………..
I would like to start off by saying goodbye to Attorney General Alberto Gonzales. I am not surprised President Bush is still defending him. Someone would have had to shoot a video of Gonzales beating one of the fired attorneys in the head with a baseball bat in order for Bush to think he did anything wrong. I am expecting a Medal of Honor ceremony at any minute. Am I the only person that notices Colin Powell and Condoleezza Rice are the only ones in the administration that haven’t been suspected of anything? That’s because a brother or sister can’t get that high by being shady.
Welcome to all the media, politicians and fake community leaders are here or on the way for the Katrina anniversary. Speeches full of empty promises and hope are just what we need. Next year there needs to be a rule put in place that says you either have to be a current resident, relocated because of the storm, or have had to be here at least a month out of the year doing something to help people. If you don’t fit into any of these categories then stay your ass home. People who have been let down by their government on all levels shouldn’t be used for propaganda and political gain. If you want to go interview or speak with some folks down in Violet in a trailer, bring them some sheetrock or roofing material. Their Road Home check will be even better. We need money and leadership not speeches.
I was happy to meet some other New Orleans bloggers at the Rising Tide gathering Friday. Other commitments kept me away on Saturday and Sunday but I will be trying to pay more attention to the local scene. I must admit that I like this blog being more of a renegade site for my free expression. It’s not all about New Orleans all the time.
Yes, he was stupid. I know I said I didn’t feel sorry for him because he couldn’t play football right now. I think he deserves what he gets because he should have made better decisions. I also don’t want to sound hypocritical either but some of these people act like Mike Vick was in the bushes with O.J. I like animals too but you can’t be calling for the brother to be castrated and all that foolishness. Some people take things too far. That must be the same fanatics in the canoes passing up humans during the flood to go rescue squirrels.
I would like to welcome Mr. Michael Darnell to the New Orleans City Council. Please don’t feel any pressure to come up with any master plan or make big improvements. Some of your colleagues have been behind that desk for years and haven’t come up with anything. Why should you stress about anything? I will be happy if you just stay out of the news and not give a construction contract to your cousin who doesn’t have a construction company.
Would it be too much to ask for the city to take down all the school zone signs near schools that haven’t reopened? I guess that’s not possible since a school can open in New Orleans at anytime and no one knows where the hell they are going to be located. Now that I think about it, we should just make the speed limit 20 miles per hour everyday city wide from September to June. No one knows where kids go to school anymore.
Posted by Clifton at 8/27/2007 06:38:00 PM

I was so happy to see you on Friday. Keep on writing.

Plus, after seeing a kid nearly run down on Canal Street Saturday, i agree that everyone oughta be driving at 20 mph. Don't go knocking down the future.