Where Are The Guns Coming From? 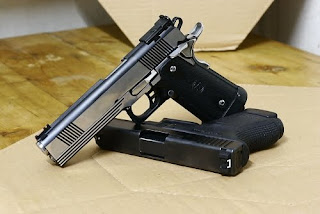 Mayor Mitch Landrieu had a press conference with Chief Serpas and other officials here in New Orleans last week to announce they were going to use Project Safe Neighborhoods to try and track down the source of illegal weapons in New Orleans. Personally I wish we could ban all firearms but this is America and we have the Second Amendment plus the NRA so that won’t ever happen. I guess Project Safe Neighborhoods will have to do. If it helps makes the streets safer then so be it.
I’ve known a few cats that operate outside the law but I can’t honestly tell you I have any idea how someone would purchase a weapon like an AK-47. I am sure you could probably find out if I tried but I think that’s a level of access to the underworld that I don’t have. If I knew I would make an anonymous phone call and put law enforcement on the right track. I’m sure there are some people who could do this right now but they won’t because of that dumb ass snitching code. We are going to keep our mouths closed straight to endangered species status. You would think that it wouldn’t be too many places you can get some of these weapons because they are so powerful and deadly. Wal Mart isn’t selling stuff like this. You would think only people with government clearance could get their hands on some of this stuff. How can a teenager who society barely lets out of his own neighborhood get his hands on an entire arsenal of them? I will never understand this and it pisses me off.
While I don’t know how to find a major gun dealer at a moment’s notice I do know that one big problem we have is all the regular honest people who buy guns for protection that eventually end up on the streets. A lot of people arm themselves knowing they don’t really have the heart to shoot another human being but it makes them feel more secure. I know that happens here because people don’t trust the justice system so they feel like they have to do it themselves. They just want to feel safer and I understand that. The problem with this is that there is very few times someone actually gets to use their weapon to fend off a criminal. You might hear about that every now and then but those stories don’t appear to stop other people from trying to do the same thing the criminal that got shot tried to do.
The other thing is that no matter how the stories may appear this is not the Wild West and the majority of us have to go to work and different places. They leave guns in their cars or at home during the day and many of those weapons get stolen and end up being passed around between groups of friends if something happens and they want to use it. I know people have guns around the house to feel safer and they won’t stop having them but I just hope everyone thinks really hard about that decision. Unless your willingness to pull the trigger is as strong as the person you are trying to protect yourself from you don’t need a gun. You might just be adding extra artillery to the streets.
Posted by Clifton at 7/21/2010 07:09:00 PM

It's legal to own a semi-automatic AK-47 in the US. And it's easy (though illegal) to convert a semi-automatic into an automatic. The Gunshow loophole allows the sale of weapons between individuals not involved professionally in arms trading without conducting a background check on the purchaser.

Viola! That's how crooks get automatic weapons. Everything there is legal except the alterations to the gun to convert it to automatic.

Years ago, back when they did actual programming, MTV did a documentary on kids with guns. One of the most haunting quotes from a bandana faced youth was "the problem with this country is that it is easier to get a gun than it is to get an education."

It isn't good when legally purchased weapons are stolen, but that number is actually a very small percentage of guns that end up on the street.

Anonymous has it closer to correct. A lot of these weapons are purchased through loopholes, modified illegally and then sold off the books. The market for illegal weapons in this country is just massive.

That still does not tell the whole story about how the "teenager who society barely lets out of the neighborhood" get their arsenal. That one is much more complex.

The vast, vast majority of crimes committed and weapons busts by police nationwide do not involve AK-47's or rocket launchers and all that. They are usually illegally owned or concealed handguns, illegally sawed-off long guns or any gun owned or found in the possession of a felon. This is because weapons of this nature are simply the easiest to procure nationwide. AK-47's are far more difficult.

However, New Orleans has a high AK-47 and AK copy trade due to this being a port of entry for such weapons, drugs and other contraband. The geography, economic location and lack of robust enforcement make this a smuggler's paradise. (Please see also, Houston)

Wow. I didn't realize AKs were more common in NOLA than in other parts. If that's true, there's a story the Teep should be writing!

I suspect the problem with the AK is that for obvious reasons (its size) it's not a very practical weapon for violent criminal acts, unless you're a drug-cartel hitman in Juarez or something.

I've always found the legality issue of gun use to be superfluous. Of course a person who has a gun illegal and uses it illegally is acting illegally! This argument is often used by NRA types to say any effort to stem the availability of guns is punishing law abiding citizens is a crock.

I know the Second Amendment is undeniably in favor of the individual's rights to bear and keep arms. (There's no away around that, that is a deeply ingrained right in American society.) But I find the aggressiveness by which gun-advocates counter any effort to stem the epidemic of "angry youths with guns" to be sickening.

I don't know what the answer is, but clearly there is a problem when, as Cousins from Ga. points out, it's easier to get a gun than an education.

Some of the most aggressive gun-rights advocates don't have to live in areas where there is a far greater chance of being shot. And certainly they get far more attention than people who have to live in these urban-conflict zones.