CP3 Wants To Leave Us 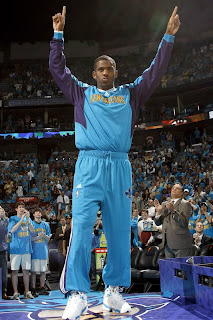 I am not upset that Chris Paul wants to be traded. Basketball is his business and if goes to New York he will have more opportunities to make money. When you are a fan of small market teams that’s just how it goes. I love the Saints as a team more than any individual player because none of them are obligated to have the same passion for my city as I do. I love what they do but I am always prepared for them to leave for better situations. Even though the Knicks have sucked for years and besides the few years in Patrick Ewing’s prime when they got close haven’t been able to win jack, I understand why Chris Paul wants to go to New York. It fits the group of players that he's friends with.
I say let him go as long as the trade doesn’t end up being like the one Memphis did when they sent Pau Gasol to Los Angeles. We need to get at least two starters and a first round pick from someone or it’s no deal. He can stay here and sit out 40 games with a sprain thumb ligament like NBA players do when they want to be traded. Baron Davis already gave us a sample of that stuff a few years ago so we know what’s coming. I was just hoping he at least gave the new coach and general manager at least a season to show him if they could turn things around or not. I guess the people the Hornets hired couldn't match Pat Riley's stature. That's how it goes.
The only thing that’s really going to piss me off is the brown nosing reporters that work around the NBA. They are going to take every opportunity to dog New Orleans like somehow we didn’t do right by Chris Paul. They are going to make it seem like Chris Paul had to escape this dysfunctional place and do the best thing for him and his family(This does not apply to Adrian Wojnarowski). Lebron James had that same message on his Twitter account yesterday. I just want to tell the world that ever since Chris Paul was drafted all the people of New Orleans have done is give him nothing but love and praise. Until this offseason you would have trouble finding anything written or said about him in a negative light in this city. I guess being in a city where you could make the most money and get treated like a hero isn’t as important to a player and his family as it used to be. Maybe I'm just too New Orleans to understand anyone wanting to leave without a good reason.
You know what….. I think I’m just going to go ahead and blame this one on the oil spill too. That way George Shinn can file a claim for all the tickets he won’t be selling if Chris Paul leaves.
Posted by Clifton at 7/24/2010 02:27:00 AM

No one can blame a player for taking the best deal he can get. And trade demands have been a part of professional sports since the Cincinnati Red Stockings first took the field in 1869.

On the other hand, any one who has signed a contract under the protection of a collective bargaining agreement has no business going into a sulk and tanking it. I've never looked at Randy Johnson in the same way since he pulled that stunt to force a trade from Seattle.

But CP3 strikes me as a good kid, although you'd know better than me.

The bigger question is, what the heck happened to the Hornets? A couple of years ago, they gave the Spurs everything they could handle in a series that came down to who had more experience. They looked to me to be on the cusp of becoming an elite team.

We are running a non-profit site only for the sake of information sharing.

We would be pleased with your positive response. Looking forward for your reply...