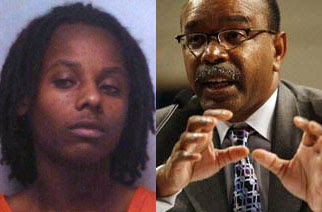 What the hell are you doing brother?

What happened to the dude in the cool hats prosecuting Edwin Edwards?

What is going on with you?

You wouldn't have gotten this far in your career if you displayed the bad judgment you are displaying now. You know once you fired those people without a legitimate reason everything had to go right to keep things together. Until this drama blows over, don't let anyone visit your house that you don't know personally. I read the story and I realize you didn't have anything to do with the robbery, but damn Eddie. You need to be working an evening job to come up with this extra cash to pay this settlement. If you don't one of your ex employees will be renting out the second floor of the traffic court building once the court seizes it.

Looking into my crystal ball I can already see what's about to happen. Eddie Jordan is going to run for re-election. Some group is going to run an ad that goes over the line and gets too racial. Community leaders are going to jump all over that and rally around Eddie. The city is going to be right in the middle of a color war. Black people will get up and vote for Eddie out of spite. He will win. The next day the Times Picayune will be flooded with letters from people saying they "have had enough and are leaving this awful place forever!" Then, I will repost this the day after the election and look like a genius. I'm no genius by a long stretch. I just know the local formula.

If you think he's going to step down you can forget it. Everyone in local politics is tied to these organizations with the catchy names like SOUL, GUMBO, PUSH, etc... They control so much money and influence that it would take years to recover from someone stepping down in shame. That's why William Jefferson ran again and why no one will ever ever ever turn against Marc Morial. They have to protect the machine. The same people who foolishly advised him to layoff all those people will also tell him to take the heat and not resign.

Maybe I am wrong and he will step down. We will elect a new district attorney and everyone will feel safer when he convicts a few of the hardcore criminals. Then, a few months later the crime stats will go back up and we will realize that the district attorney, sheriff, police chief, or the mayor have nothing to do with the large amount of young men who feel the need to engage in criminal behavior. Maybe the new DA will prosecute every member of the school board for the last 40 years. They are responsible for at least 40 percent of this crime problem.
Posted by Clifton at 10/26/2007 08:26:00 AM

If I was a gambling man I'd lay odds your prediction is correct. But I hope we'll all be surprised by some turn of events. Anyway, you're certainly right that the D.A. can't stop violent crime. I do believe that such blatant incompetence can't go unchallenged, however.

Jordan is Dollar Bill's guy so the other groups will line up against him for that reason. I think he's toast but you could be right.

Oh, yes, those dang political machines. They are keeping the brand out there...but, Lord, forget all the intricacies of the acronym brigades...Eddie just needs to take better care of himself, period.

Did you pose the question about the fact that the strategy should be not just to change the faces of corrupt officials in the system, but to change the system itself to prevent corrupt officials from gaming the system? I think you've nailed it here. The more difficult task is preventing corrupt officials -- black, white, or other -- from using their political machines and hot-button rhetoric to exploit their constituents. It's one of the most important things we need to do to rebuild this city -- and is the reason why that $3 million budget for the Inspector General needs to be funded right now. The city's general fund is over $400 million. Add in federal grants and other funding sources, and the entire budget is over $700 million. We can afford this. What we can't afford is continuing a system which steals from children, deprives them of educations, and deprives them of more dignified lives in a clean, robust economy. We can't do that until "what" you know is interpreted as more important than "who" you know.

Your right there is a machine in the city. But it seems like the dominos are starting to fall. Question is will there still be a city government in place after they all fall and what will this do to the city?

"Maybe the new DA will prosecute every member of the school board for the last 40 years. They are responsible for at least 40 percent of this crime problem."

I remember going to Fannie C. Williams and getting a B for doing jack squat. I had one teacher who I SWEAR didn't remember my name. Sad.

Thank god for making me a Mustang. :-)

I honestly think that would explain the attitude towards the crime problem in the black community here. There is no one who came through the public school system that doesn't understand how things got this way. In 7th grade we shared reading books with every student that went to the same teacher and the book itself was 20 years old. It wasn't until I got to college that I realized what happened.

Man, That's so Cold and so Right.

Dude, my brother was five grades ahead of me. I remember in fifth grade, I was issued HIS fifth grade science book. WTF? When I lived there, I was waiting for my son to come home with a book with my name in it. Let's not even talk about Alcee Fortier. I had a friend who went there, and they weren't even allowed to take the books HOME!

We need to go all the way past Eddie and up the food chain that leads to all these School Board thieves. Getting money to the schools, students and their teachers is the only way we're going to get kids away from the need to be criminals to think that they're somebody. These assholes are turning kids into killers and people vote for them anyway out of spite (same goes for the Republicans at the federal level).

I read on Editor B's blog that public school kids here can't take their textbooks home. That is the most shocking and saddest thing I've heard in a long while.