Barak Needs To Speak To Bobby 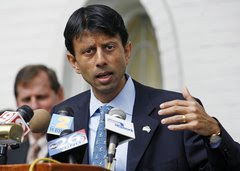 Barak Obama can learn a lot from our Governor Bobby Jindal. Here’s a guy who ran as the savior of the state. He’s young, intelligent, and he appears to have a different approach to how government is supposed to operate. His local campaign of change and a new direction sounds very similar to Senator Obama. He is also following an unpopular predecessor just like Obama will be. He won the governor’s race without a runoff. It was a mandate from the people that wanted things to change. When Governor Jindal got in office he quickly realized that one cat alone can’t wave his hand over all those career politicians and a system over a hundred years old and change everything. The governor made a deal to get his agenda passed. The pay raise was part of the deal so he wasn’t going to veto the deal. The people heard about it and went as far as drafting recall papers. Today, he decided to “correct his mistake” and veto the legislative pay raise.

People all over message boards and the news media are jumping for joy at the fact their voices were heard and the raise was vetoed. We will see how many of these people keep paying attention when Governor Jindal introduces bill after bill that doesn’t get any cooperation because he went back on his word to the legislature. It may not be a big news story like the pay raise but you watch how many smaller things don’t get done because of the gridlock. He probably could have avoided all of this by mentioning sometime during the campaign that the kind of change folks are looking to see takes place over years and years of policy change and new faces. Maybe then he wouldn’t have had people looking to recall him six months into his first term behind a bill he hadn’t even signed yet. Things can turn really fast when folks expect a miracle.


How does this translate to Obama? Somewhere along the line he needs to talk plainly to these people who think he is going to get inaugurated in January, end the war in February and get gas prices cut in half by March. He needs to let them know that the truth is with the problems he is inheriting all he can do is lay the groundwork for the next few years. We probably won’t be leaving Iraq anytime soon. Those jobs that have been outsourced probably are not coming back and gas is going to be high for awhile unless you want to drill a few holes in Alaska. If something happens in the Middle East that makes the country feel threatened, he might even have to drop a bomb on someone. He needs to let people know how this process works. Those lobbyist and special interest groups aren’t going to close down just because he wins. If he doesn’t keep it real with the public and things don’t change real fast, next year this time we will be talking about how his approval ratings are so low that George W. Bush looks like George Washington. You have to look past November 5th.
Posted by Clifton at 6/30/2008 08:29:00 PM

Louisianans should also require Gov Jindal to veto bill SB312, a fluoridation mandate bill which will require that unnecessary and harmful fluoride chemicals be added to all public water supplies. Legislators seemed confused about the bill they voted for

People can send a letter to Gov Jindal here:

You make a very good point. People do expect change over night. I know lots of people are waiting in the wings to say I told you so to Obama. Its just human nature for some to want to see others fail, unfortunately. T.