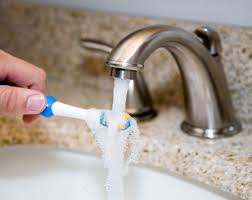 It’s about 6:30 PM and the city of New Orleans is under boil water advisory. Last night the main water plant lost power and the pressure was low. Now we have to boil water before we drink it or brush our teeth. I didn’t know about the advisory this morning and had already made my coffee. I think I will be okay. I’m going to have a few shots of straight whiskey tonight to kill any bacteria that may have gotten through the coffee filter. I boiled some water to brush my teeth and it took about 30 minutes to cool down before I could gargle. Monday morning there’s going to be a whole bunch of people calling in sick because they don’t feel right after drinking water. The funny part is going to be when most of those people don’t even live in an area under the advisory. Hell, if I get a hangover after the celebrating the Saints victory tomorrow I might try it too.
All jokes aside, this kind of thing scares me a little. The first thing you do when you get out of bed is go to the bathroom and brush your teeth. I almost feel like something that could affect that many people should warrant the police going through the streets with loud speakers telling everyone to boil the water first. I don’t keep my cell phone next to me all night and if the TV is on cable I won’t catch the news. We may have to do a better job at communicating things like this to the people.
The only good thing about this is that I get a chance to post a Parliament song. The Eastbank of New Orleans is doing the Aqua Boogie tonight at its boiling point.
Posted by Clifton at 11/20/2010 07:27:00 PM

This is a pretty elaborate plot to poison the Seahawks, Cliff. I really don't think you'll need it.