Week 5: A Message To The Fans 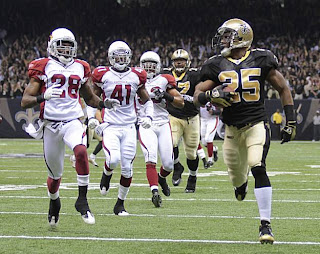 The Saints play Arizona Sunday afternoon. The Cardinals will be starting a rookie quarterback. Despite the injuries we have, I’m not worried about this game. Instead of analyzing this week’s game I want to talk to the fans and give them a little reality check. Last week after a usual close game with the Panthers there were people talking about how awful we looked and discussing whether or not fans should be worried. I even heard a few boos during the game. It’s time to break out my favorite Saints game story.
There was nothing more frustrating than being a season ticket holder during the Haslett/Brooks era. The difference between the Mike Ditka years and the Haslett years is that during the era of Mike Ditka I knew we weren’t going to win. We were outmanned and outcoached. I’m surprised that last team he had here didn’t go 0-16. The Haslett era after his first year was nothing like that. Every year we had a chance to make the playoffs but we just didn’t do it. Those teams were bipolar. We could blow out a team by 20 points one week and then lose the next three games by 30. What made it even worse is that the coach used to get pissed off at the fans for acting like they were unsatisfied and the quarterback used to not seem to be that bothered about it either. I’ll never forget the final game of the 2002 season when all we needed was one win with three games left and we tanked all three including the last one to Carolina when Aaron Brooks arm was about to fall off.
During the 2004 season we played a home game against the Denver Broncos. This was the season that the team started 4-8 and then decided they wanted to be good and won the last four but didn’t make the playoffs. By that time the frustration with the fans had reached a fever pitch. During the first quarter of that game the Broncos almost ran for 100 yards in that one quarter alone. I think they finished with about 96 yards. My cousin David was at the end of his rope and by week 10 he was so delirious he was pulling for the Broncos to reach the century mark. What made it even worse is that it seemed like the Broncos ran the same two plays over and over and they worked every time. Well, at some point in that game we were down by double digits. I don’t remember the exact score at the time but the Saints made a touchdown. The entire Superdome broke out in a second line dance. That led to the highlight of my season ticket experience when my cousin in the midst of all those happy losers started his rant. All I remember is the first two lines…..”We live in a city with some ignorant motherf!#Kers! Don’t they see the scoreboard?” I wasn’t celebrating a touchdown to keep the game close either but I was too busy laughing at him to look upset.
Now, if we can spend our money and dance through all of the foolishness in the past we can’t be tripping about a 3-1 start after a Superbowl winning season. Saints fans I am begging you in the name of all that we have been through with the team and personally. Don’t let success turn us into a bunch of assholes. We got a real coach and GM that work together. The coach has a great staff. The players on this team act like they were raised here and the quarterback let you guys suggest names for his new baby today. Everyone needs to relax and not let ourselves turn into Jets fans. We don’t want to be obnoxious like they are. Let’s enjoy this era.
Saints 27 – Cardinals 10
Posted by Clifton at 10/08/2010 09:33:00 PM

I always wondered what happened to Jeff Blake. I think if he hadn't broken a limb in one of those first Haslett seasons, he might've been the go-to guy instead of Brooks.

But I agree. Any day is a good day to be a Saints fan, even when they aren't doing so well....because you're surrounded by great people who love the team and who, at heart, are most certainly not a bunch of assholes. My years in NYC only cemented my love for the Saints and their fans. Let's not mess this up.