Giving Up Is Not An Option 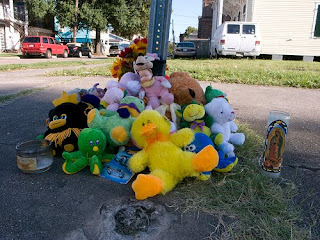 Monday was the funeral of two year old Jeremy Galmon who was killed last Sunday in crossfire. By all accounts he received the type of send off usually reserved for New Orleans royalty. New Orleans has a strange way of showing pain sometimes. My family has been here since horse and buggies with streets paved with bricks so this is my culture to the bone. With that being said, I thought the services should have been a more low key event. I’m not mad because everyone out there had love in their hearts. I just couldn’t have dealt with all of that if it was my son.

I would love to tell you that the death of this baby is some kind of turning point in the war against violence in our city but I can’t do that. The reason why is because it seems like every year for the last twenty years or more a child has been sacrificed as sign of our community not getting it’s act together to curb the violence. I could close my eyes right now and at least five instances come to mind without much effort. Their stories come to me easily because each one has bothered me just like Jeremy’s murder. I think that deep down they bother the majority of the people in our community even if they don’t express it outwardly. If it was left up to us there would be no violence and no trouble but unfortunately it’s not.

The sad truth is that we have a subculture of individuals in our community that live in their own little world and there’s always something going on. They are so locked in to the code of the streets that I wouldn’t be surprised if they don’t even know the community is coming together behind this baby’s death. It’s difficult for outsiders to see because we share the same neighborhoods and upbringing so they don’t know the difference. Those common bonds also make it difficult for us to deal with it because there’s a lot of emotion and history involved. After all the loss of life and pain we still haven’t found a way to separate ourselves enough from Ms. Jones to call and turn in her grandchildren. That makes it complicated and dangerous as well because her grandchildren know who was out there and what if they come after your family to keep you from calling Crimestoppers. That’s a death wish especially if the justice system is just going to release them right back to the street to come looking for you.

I want to be optimistic and think that the lost of this two year old changed that dynamic for the better and people will start coming forward like they did to find his killers. That would be good if it’s true. The only problem is that if more people come forward when something happens it means that more than likely someone else’s baby is no longer with us. It might not be a two year old like Jeremy but it’s still someone’s baby even if they are a teenager.

All my life I have been a foolish dreamer. Everyday I wake up and think about the day I am getting on the interstate and the Crimestoppers billboard with the faces of young black men wanted for murder are no longer needed because this violence is the thing of the past. Until that day comes I will be preparing myself to look at another picture of a kid that’s been murdered and trying not to give up.

I find it the height of irony that New Orleans didn't make the list of 25 Most Violent Neighborhoods.
http://bit.ly/8Zw75X

I see the pic and know the little boy would LOVE to have played with all of those stuffed animals when he was alive. I also wonder what difference the people who placed them on the corner thought they were making by their gesture.

I read your writing and recall Your Ninth Ward Sister asking me what I was afraid of, when I hesitate(d) to buy a house in the Upper Ninth Ward. What am I afraid of? I'm afraid of the people who are afraid to report Mrs. Jones' grandkids.